David Martin Thompson enlisted into The Royal Ulster Rifles in April 1937, aged only 16 years, following in the footsteps of his father, who had also served with the British Army from 1914 to 1919, in The Royal Irish Fusiliers and The Royal Irish Rifles.

David was posted to the 2nd Battalion in September 1937, and served in India and Palestine before the outbreak of World War II

He later volunteered for airborne forces and undertook parachute training course 17, which ran at RAF Ringway in July 1942. The course consisted of four descents, two from a balloon and two from an aircraft.

He was posted to the 1st Parachute Battalion and was recorded in September 1943 as serving with R Coy .

In March 1944 he rejoined The Royal Ulster Rifles, returning to India with them in the following November, and later transferred to the 15th (British) Parachute Battalion when it was formed in 1945 from the 1st Battalion, The King's Regiment in India.

L/Cpl Thompson was demobilised in June 1946. 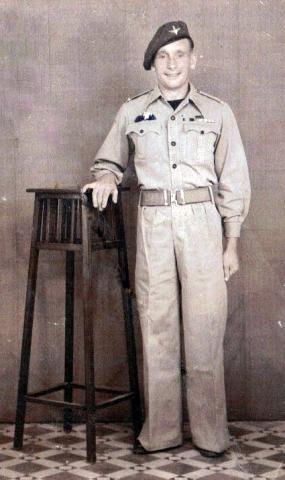