Lt Col David Michael Limb MBE died unexpectedly on 11 Aug 2000 whilst on leave at his home in France.

He was just 39 years old. He had been in command of 3 PARA for a week, and he was looking forward to joining the Battalion at Colchester when it formed up after its Arms Plot move from Dover.

I first met David at Sandhurst in 1982. He was an Army Scholar and had been at Oxford University. We were on different courses and he had already been accepted by the Parachute Regiment. But even then, it was clear that David was something special. He was articulate, gregarious and athletic, despite only being just over five and a half feet tall. He was also well-read and intelligent. More importantly, he was clearly going to be an outstanding soldier and officer, and it was not surprising that he won the Queen's Medal when he passed out of Sandhurst, as the outstanding graduate of his course.

Prior to joining 3 PARA, he took part in a successful expedition to the Himalayas led by Jon Fleming. Six years later, we served together in 1 PARA in 1988-9 when he was the Adjutant and I was the Signals Officer. In the intervening period. David had continued his very successful military career. Initially with 3 PARA as a PI Comd, he then had served in Uganda with the British Military Training Team, after which he was awarded an MBE at the age of 24 for assisting in the evacuation of British nationals during a coup. There then followed 18 months as ADC to Gen Geoffrey Howlett in Norway.

David was an outstanding Adjutant and it was then that he really made his mark. His enthusiasm, drive and positive attitude were hallmarks of his 2 years under John Reith and Dick Trigger. He involved himself in all aspects of Battalion life, not just limiting himself to G1 matters. He knew virtually all of the Battalion by name. I particularly recall his fiercely competitive spirit which always came to the fore during inter-company sports, or even whilst playing a quick game of squash. In everything that he did, David gave his all.

After he left 1 PARA and before going to Staff College, David served with 1 RGJ [1st Royal Green Jackets] as a Coy Comd in Germany. I was not at all surprised when I heard that he had managed to be deployed on Operation GRANBY in 1990/1, serving as a Liaison Officer between British and US Headquarters. He did extremely well in the Gulf and he was awarded the Bronze Star by the Americans. This was another significant achievement.

After completing Staff College, David returned to 1 PARA as a Coy Comd, serving in both Northern Ireland and Aldershot. He did his major's staff appointment also in Northern Ireland, serving at HQNI on the Operations/Policy staff. He worked extremely hard during this period, and it was of no surprise that he picked up his promotion to Lt Col at the earliest opportunity. Quite rightly, he was then posted to the Staff College as a member of the Directing Staff. His students thought the world of him there.

David was then chosen personally by SACEUR, Gen Wesley Clark, to be his British Military Assistant. This prestigious appointment suited David down to the ground. It was high profile, very important, dealt with big issues and was great fun. He enjoyed getting involved, and his role during the Kosovo operations in 1999 was significant.

I remember speaking with him in the middle of the bombing campaign, when things were a little tense between SHAPE and the MOD, where I was working. Despite the incredible pressure and high pace of life, David relished the excitement of the moment. He enjoyed the military networking and he excelled at the verbal jousts in which he actively engaged. David was always worth a good argument and, often much to my annoyance, he was very rarely wrong. His experience, intellect, original thought and boundless energy made for a powerful combination.

But for all the enjoyment of his staff appointments, it was as a leader that he excelled. He loved his soldiers and he relished commanding them. He could not wait to take over 3 PARA and it is much to the loss of the Battalion that he was not allowed to make his mark on them.

David Limb was a great friend. He was utterly loyal and great fun to be with. He had so many talents and was hugely gifted. He kept himself frantically busy with his various hobbies such as flying and freefall parachuting. Nobody else could have coped with his hectic lifestyle.

David leaves behind his widow, Amanda, whom he married in 1994. and their young daughter, Alice. He was a devoted husband and father, and our thoughts and prayers must go to them, and his parents, Roy and Olive, and his brothers Robert and Andrew, and his sister Helen.

David was one of the most able and gifted officers of his generation. His flair, sense of fun and bouncy approach to life will be greatly missed by everyone who knew him. We have all lost a great friend. The Army and the Regiment have lost an outstanding officer.

Text originally produced by Brig John Lorimer DSO MBE for The Yearbook of the Parachute Regiment and Airborne Forces 2000 (2000). 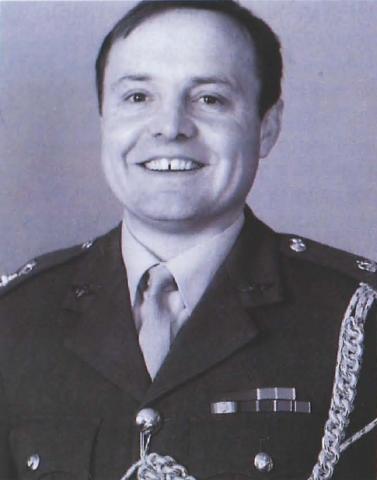