David 'Chuck' Hardman was born in Hamilton, Scotland, the youngest of a family of four, and spent his early years on the Beechfield small holding in Meikle Earnock Road. Later, he enlisted into the Army on his sixteenth birthday in 1975 and joined the Junior Parachute Company as a boy soldier at Aldershot. After his recruit training he was posted to 2nd Battalion, The Parachute Regiment in 1977 and completed a posting in Germany followed by a residential tour in Northern Ireland from July 1979 to Mar 1981.

Chuck Hardman served as the senior corporal of No 2 Platoon, A Company, 2 PARA from 1980 to 1982 and fought in the Falklands campaign.

The Battalion was first ashore on 21 May 1982 and dug in on Sussex Mountain above San Carlos, with a bird’s eye view of the continuous bombing attacks on the ships below. 2 PARA was ordered to capture Darwin and Goose Green and set off on a beautiful clear evening.

The Battalion attacked on the morning of 28 May but by dawn A Company became pinned down in a gorse gully below Darwin Hill by very strong Argentine defences .

Having previously taken part in the casualty evacuation of both Corporal Prior and Private Worrall, Corporal David Hardman, was killed by small arms fire, along with Capt David Wood and Capt Chris Dent , who with others had formed an ad hoc assault group tasked with securing a ridge dominating the gorse gully.

A profile of David Hardman

David Hardman was born on 22 December 1959 at Hamilton, Scotland, the youngest of a family of four, and spent his early years on the Beechfield small holding in Meikle Earnock Road. 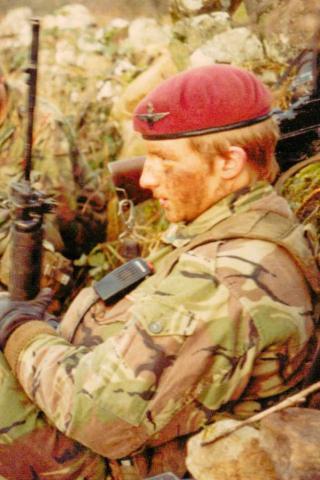 Bill Bentley said:
Chuck's favourite drink was a Harvey Wallbanger and he still owes me 70 quid ! So, next time we meet the drinks are on him!
Bill Bentley said:
I have read Dilip Dey's very fitting comments about 'Chuck Hardman' and can only say: 'Pot calling kettle!'
Dilip was himself an exceptional soldier and obviously learned very quickly from his mentor. Not every brave man won a medal.
Add your comment