David Heal was born at Dryburn Hospital in County Durham on the 2nd November 1962.

The son of Gordon Richard and Rosalleena Heal, Dave joined the Depot The Parachute Regiment and Airborne Forces at Browning Barracks in Aldershot on the 2nd June 1982 and attended the Basic Parachute Course at R.A.F. Brize Norton on the 3rd January 1983, completing it on the 2nd February 1983.

His Passing Out Parade, with 486 Platoon, was on Friday, 18th February 1983, and he was posted to the 2nd Battalion, The Parachute Regiment (2 PARA).

In 2 PARA he was sent to 3 Platoon, ‘A’ Company, and soon after joining the Battalion, he was on his first operational tour, which was 6 months in Belize, in Central America in 1983. Read the account of "The Lost Patrol" here.

The following year he went to Crossmaglen Security Force Base in South Armagh, Northern Ireland, still serving with 3 Platoon, to carry out a 6 month tour of duty. This finished in 1985. After this tour there were various exercises in different parts of the world, including Kenya in Africa, but Dave was also on the Battalion Drill and Duties Cadre, 22nd April to 3rd May 1985. Having passed the battalion Cadre for the Anti-Tank Platoon, he was posted to Support Company, 2 PARA in June 1985. In the latter part of 1986 Dave was promoted to Lance Corporal, and he then went on to do the Anti-Tank Detachment Commanders Course, 23rd March to 8th May 1987, which he passed.

An extract from his Report:

L/Cpl Heal was well prepared for the course and worked hard to achieve an above average pass. A keen, professional JNCO, L/Cpl Heal maintained an enthusiastic and diligent attitude throughout the course.

On the TEWT’s he proved that he could site the weapon system effectively and always expressed himself well during the tactical discussions.

On exercise he was an above average commander with excellent command and control. His battle cards were neat and accurate and he demonstrated a sound understanding of the tactical handling of MILAN.

L/Cpl Heal is well able to command and train a MILAN Detachment to the necessary operational standard.

Later in 1987 he was back in Belize, and by this time Dave was an Anti-Tank Platoon Detachment Commander in Support Company, and was trained to operate both the 120 mm WOMBAT (Weapon Of Magnesium Battalion Anti-Tank) and MILAN weapon systems. Although the main weapons system in Belize was actually the CONBAT (Converted Battalion Anti-Tank), which could be towed, it was exactly the same principle of operation as a WOMBAT, and Dave and the others of the 2 PARA Anti-Tank Platoon were amongst the last British soldiers in the entire Army to operate this weapons system, before they were scrapped.

Upon completion of the tour in Belize, and return to the UK, Dave went on the Section Commanders Battle Course. Phase 1 (Skill At Arms) was from the 26th June to the 4th August, and Phase 2 (Tactics, at Brecon) was from the 21st August to 7th October 1988.

Dave attended several more courses and took part in many Battalion level exercises, before yet another Northern Ireland tour was to commence in 1990. This one would be in Fermanagh, and ‘Dave’ was by now a Corporal, but still with the Anti-Tank Platoon in Support Company.

On return from the Northern Ireland tour Dave was posted to Pirbright, in September 1990, as an Instructor for two years. Here he was responsible for training the young soldiers of the Junior Parachute Company.

Dave then returned to Support Company, 2 PARA, and was with them on the 1992 emergency tour in Belfast. He attended the Platoon Sergeants Battle Course between January and April 1993, passing both phases.

Two months later he went to Palace Barracks in Northern Ireland for a 2 year Residential Tour. He was by now a Sergeant, and the Platoon Sergeant of 3 Platoon, ‘A’ Company, a very proud moment for him. During the Residential Tour Dave was in the 2 PARA Battalion Football Team and was noted for ‘managing’ things from midfield!

In July 1994 he was posted to ‘D’ Company, 2 PARA, whilst still on the Residential Tour, and stayed with them until the return to Aldershot in 1995. Later that year he was posted to the Recruiting Office at Salisbury.

On the 30th June 1997, Dave was promoted to Colour Sergeant and after completing his time as a Recruiter he was posted to 3 PARA, then stationed at Connaught Barracks in Dover. Here he had the pleasure of taking over as the Platoon Commander of the Anti-Tank Platoon and commanded them on several large live-firing exercises, including one in Canada.

On the 19th June 1998 Dave was on Parade as a member of No 9 Guard, 3rd Battalion, The Parachute Regiment, on Queen’s Avenue in Aldershot. This was as part of the ceremony to receive new Colours for the 1st, 2nd and 3rd Battalion’s from His Royal Highness, Prince Charles.

After a year as the Anti-Tank Platoon Commander he moved to ‘A’ Company as the Company Quartermaster Sergeant. In the period from December 1999 to May 2000 he was deployed to East Tyrone in Northern Ireland, on yet another 6 month Internal Security Operation.

In 2001 Dave was promoted to Warrant Officer Class II and was posted to 10 Company, 4 PARA, which was located at White City Territorial Army Centre in London, as a Permanent Staff Instructor.

In early 2003 Dave was posted to ‘D’ (Patrols) Company, 3 PARA and was deployed to Kuwait with the rest of the 16th Air Assault Brigade Battlegroup to take part in the Second Gulf War – the invasion of Iraq.

Dave finished his service as the Sergeant Major of ‘D’ (Patrols) Company, 3 PARA, in 2004.

Just before Dave completed his service he was awarded the Long Service and Good Conduct Medal.

He worked as a Private Security Contractor for one year before moving to the Netherlands and settling in Heelsum, and then in 2018 he moved to Oosterbeek.

Dave died on the 24th August 2021, and his funeral took place on the 30th September at Gelding Crematorium, Catfoot Lane, Lambley, Nottingham. 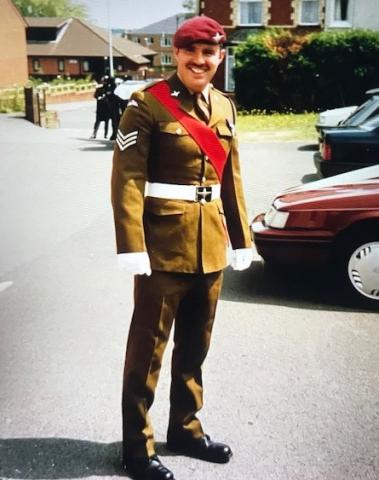