Lance Corporal David Dadswell was the son of William Alfred and Nellie Dadswell, and husband of Doris E Dadswell, of Crowborough, Sussex. He served with the Royal Army Service Corps, attached to 181 Airlanding Field Ambulance, Royal Army Medical Corps. He took part in the glider insertion to the Battle of Arnhem, during Op Market Garden.

Lance Corporal Dadswell died during the Battle between 22-3 September 1944, aged 33 years old. After an initial field burial near the Schoonord Hotel, he was reinterred at Oosterbeek War Cemetery, Arnhem. 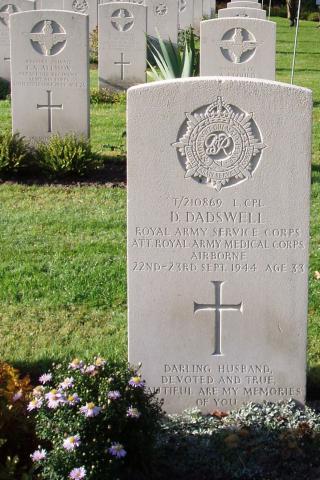 Stephen Spicer said:
I never knew my grandad, but my nan used to tell me all about him, and about Op Market Garden and 181 Airlanding Field Ambulance.

I was very pleased to be invited to a 181 Airlanding Field Ambulance reunion where I met all his old mates. What stories they had! I was told how he was killed and how the battle unfolded, and they all signed a lovely print of the drop zone. I have some good memories of that day...
Add your comment