Lt David Duncan Graham was granted an emergency commission into the Army Air Corps on 13 May 1944 and served with The Parachute Regiment.

He qualified as a military parachutist on Course 118 which ran at RAF Ringway from 29 May to 15 June 1944 and was briefly posted to No 1 Airborne Forces Holding Unit.

Thereafter, he participated in the Ardennes campaign, patrolled the River Maas in January and February 1945, took part in Operation Varsity on 24 March 1945, and the advance to the Baltic.

Shortly after the end of the war in Europe, he was part of the 9th Battalion's small advance party that 3rd Para Brigade sent to India for jungle warfare training. After completing the course, he rejoined 9th Battalion in Palestine and was assigned to B Company.

He returned to the UK with the amalgamated 8/9th Battalion and stayed with it until it was disbanded in June 1948.  David relinquished his commission on 5 May 1951,emigrated to Canada and joined the Canadian Army.

He retired from military service effective Christmas Day 1971 at the rank of Major, and now resides in Toronto, Canada.

David passed away on 11 August 2016 at the ripe old age of 91. He lived a long life and died peacefully knowing that he was loved and cared for.

Compiled with the kind assistance of John Graham 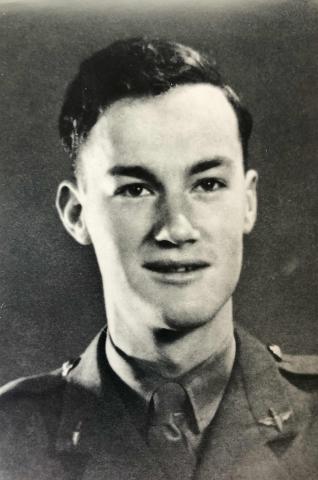