Colonel David Benest OBE was commissioned into The Parachute Regiment in 1973 and retired in 2009 as a full colonel.

Born on 29 April 1954, he attended the Royal Grammar School, Guildford, where he played rugby for the first XV and was a keen member of Combined Cadet Force.  His first tour was with the 2nd Battalion in Northern Ireland, to which he was to return many times, finally in 1996 as Commanding Officer in South Armagh for which he gained his OBE. He also had several tours in the MOD from 1986 onwards where he played a key part in the provision of equipment and communication systems for use in Northern Ireland and enjoyed the stimulus of working with scientists on the application of technology in counter-terrorist operations.

David won the respect of fellow officers and soldiers for his fairness, generosity and intelligent approach to military life. He took an in-service degree at Keele University in international relations, graduating with a first in 1981. The following year he was Regimental Signals Officer with 2 Para during the Falklands conflict, after which he was tasked by his Commanding Officer David Chaundler with writing an account of the battalion’s campaign. This formed the basis of 2 Para Falklands: The Battalion at War by Major General John Frost published in 1983.  David’s determination to pin down the truth led him to rework the original manuscript in recent years, with the support of his sister, Jacquetta, and to entrust it to the National Army Museum for safe-keeping.

A soldier-scholar, David was able to combine his military and academic interests in later Army roles, notably as Colonel Defence Studies (Army). He was never afraid to challenge conventional wisdom but recurring strain led to a diagnosis of PTSD which troubled him in later years. In retirement he reviewed numerous books for the British Army Review and pursued his arguments for a better ethical education for all ranks.

David raised more than £10,000 for The Ulysses Trust, a national charity founded by Lt Col (rtd) Philip Neame MBE that funds expeditions for young cadets, through a local newspaper round.  He died on 10 August 2020 of heart disease at the age of 66. 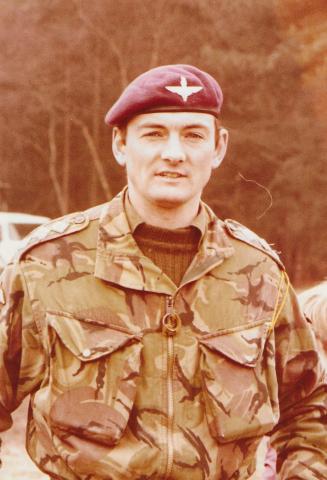