Dave Kempster and his brother, Tony, passed out of the Parachute Regiment and Airborne Forces Depot in Platoon 460, together with another pair of brothers Dilip and Denis Dey who went to 2 PARA.

Dave and Tony went to 3 PARA and fought in the Falklands Campaign. Dave served in  B Company's 4 Platoon under the command of Lt Andy Bickerdike.

During the Battle for Mount Longdon, 4 Platoon's route up the side of the mountain brought them into arcs of fire from Argentine emplacements and bunkers whose armaments included .50 calibre and General Purpose Machine Guns. Several members of the platoon were hit including Dave, who was seriously wounded.

Ian McKay, Dave's Platoon Sergeant, was posthumously awarded a Victoria Cross for his role in leadng a charge over open ground, in which he was the last man left standing, to disable the principal machine gun position which had pinned the platoon down. 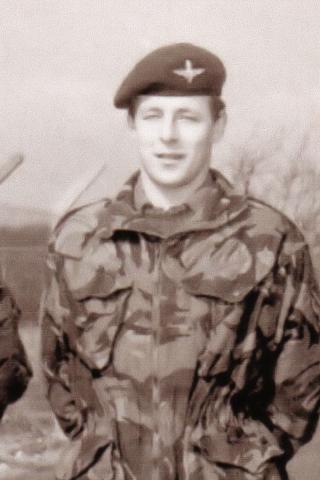 DILIP DEY said:
Dave Kempster had recently completed the Red Devils Parachute Display Team free-fall course shortly before the Falklands campaign. Having been accepted, he was waiting for a vacant position to become available when he was deployed with 2 PARA to the Falklands.
I received the news that Dave had been wounded in the Battle of Mt Longdon from his brother Tony in Port Stanley. On return from the Falklands I visited Dave in hospital. I was ill prepared for, and shocked at, the extent of his wounds. Dave had his legs shot up and his arm shot away at the shoulder, also a bullet wound to his nose. But greater than his wounds was Dave's courage and ability to shrug off the severity of his injuries, and to laugh as if he had just completed a battalion exercise.
A true fighting competitor; Dave was soon up and running around the Aldershot training area, and playing pool for one of the local pub teams. Because of the nature of Dave's injury he had to leave the army sooner than he'd liked. However, Dave with his great zest for life and can do attitude found a new and successful career in civilian life. Through the years I see Dave from time to time. He's a man who continues to live life to the full and to develop new talents. A keen cook, Dave's believed to rival Gordon Ramsay in the kitchen and vocabulary department! I didn't know until a few years ago that Dave was also invited for soccer trials at Watford FC as a youth, but opted for the pub and banana factory instead. I didn't even know Dave liked football, a testament to a modest man.
Dave Kempster is a committed brother, husband, father, and grandfather.A man who faces life with True Grit! An inspiration to all.
Add your comment