Darren Jones enlisted at Birmingham into the Parachute Regiment in August 1983 and passed P Coy with 496 Platoon in February 1983.

Pte Jones was one of twenty man from the forty that passed that were sent to The 3rd Battalion The Parachute Regiment (3 PARA).

Pte Jones’ military career was cut short due to an accident and he was medically discharged in June 1985. 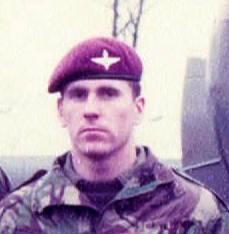