Darren Barraclough enlisted into The Parachute Regiment in 1988. He joined 542 Platoon at PARA Depot in the September but due an injury on P Company he was back posted to 549 and Passed Out in December 1989.

Private Barraclough was posted to B Company. the 1st Battalion, The Parachute Regiment (1 PARA). He went on Operation Banner when 1 PARA were posted to Palace Barracks Belfast Northern Ireland at the beginning of 1991.

On the battalion's return to Aldershot in June 1993, Pte Barraclough joined the Mortar Platoon in Support Company.

In July 1994 Pte Barraclough had a serious parachuting accident while on exercise on Salisbury Plain. He shattered his back and shoulder and after having an operation to reconstruct his shoulder and back, he returned to his battalion but only doing light sedentary roles.

In late 1995 Pte Barraclough and a fellow soldier encountered a road traffic accident on Queens Avenue Aldershot. First on the scene they administrated first-aid and with the help of others began emergency procedures, some believe it saved the life of a 2 PARA chef, who was the casually. He later received the GOC 3 UK Div Commendation in recognition for his actions, which was presented by the Secretary Of State Michael Portillo.

Despite his injuries Pte Barraclough did complete another tour of Northern Ireland in Dungannon East Tyrone for six months. This time it was not patrolling the rural countryside but working as the battalions post orderly and he also ran the PRI shop. For his hard work he was awarded the 1 PARA’s Peter Goss Trophy in 1996 and Tie of Merit in 1997.

Darren left the army after 12 years’ service in 2000 and now works as a inclusion/learning mentor in at a school in West Yorkshire. 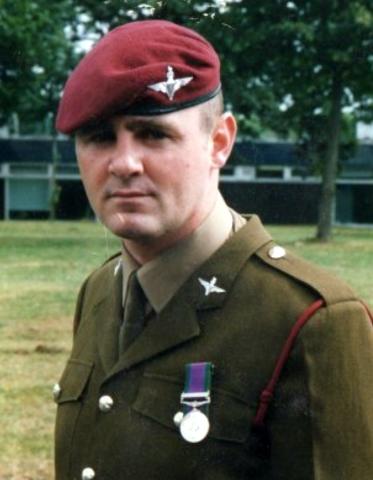