Warrant Officer Class 2 Dan Shirley Daniel Shirley was born in Leicester in 1975, he enlisted into the Junior Para Company in August 1992. After completing P Coy he was posted to 2nd Battalion, The Parachute Regiment (2 PARA).

He transferred to Army Physical Training Corps (APTC) in April 2004 and was posted to 13 Air Assault Support Regiment Royal Logistic Corps in June 2006.

WO2 Shirley was killed on Operation Herrick VIII in 2008.

It is with deep regret that the Ministry of Defence must confirm the death of Warrant Officer Class 2 Dan Shirley from 13 Air Assault Support Regiment Royal Logistic Corps in Afghanistan on Friday 27 June 2008.

WO2 Shirley was killed during a Logistic Patrol from Sangin to Camp Bastion at 2110 hrs local time when the WMIK he was travelling in rolled, trapping him beneath it.

The medical incident response team was called in and evacuated WO2 Shirley to the ISAF medical facilities at Camp Bastion where, despite their best efforts, sadly he was pronounced dead shortly afterwards.

Two other soldiers received minor injuries in the incident. The vehicle had been part of a patrol conducting force protection when the incident occurred.

The loss of WO2 Dan Shirley has come as a huge shock to every member of the Regiment. He was known to all and universally respected. More than that, he was liked and admired. He was a perfect role model for young soldiers. He was fit, irrepressibly enthusiastic and superbly professional.

WO2 Shirley served as a member of the Parachute Regiment for 12 years before becoming a member of the Army Physical Training Corps. He was fiercely proud of being a soldier and his love of the job shone through in everything he did. In Afghanistan he ran the Regimental Training Wing, where he devoted his seemingly limitless energy to teaching others how to defend themselves and avoid danger. It was a role he often took out onto the ground and he was on patrol, protecting others, when a tragic accident claimed his life.

Our thoughts and sympathies are now with WO2 Shirley’s family and with his two young children. He will be deeply mourned. His memorial will be the skills that he imparted. They have already saved lives and will save more. This is a fitting tribute to an extraordinary soldier.

WO2 Dan Shirley was an inspirational man and soldier. He was renowned for leading from the front. His outstanding personal soldiering skills, infectious enthusiasm and sense of fun rubbed off on all those who worked with him. WO2 Shirley had that rare ability to get that little extra out of everyone he taught. He is sorely missed by us all. Our immediate thoughts are with his grieving family and friends who he so dearly loved.

Dan Shirley was the epitome of the Airborne soldier. He was extremely fit, incredibly passionate about everything he did and was 100 per cent professional at all times. Dan was massively proud of his profession and never let anyone forget that he was originally a soldier with the Parachute Regiment. He was always talking about his family and loved taking his children to watch his beloved Leicester City. We will all miss his endless banter, energy and sense of humour.

I was deeply saddened to hear of the death of Warrant Officer Class 2 Dan Shirley in this tragic incident.

He was a model soldier and his professionalism and determination was an inspiration to all his colleagues. I know that he will be sorely missed by everyone who knew him. My thoughts and prayers are with his family and friends at what must be the most difficult of times. 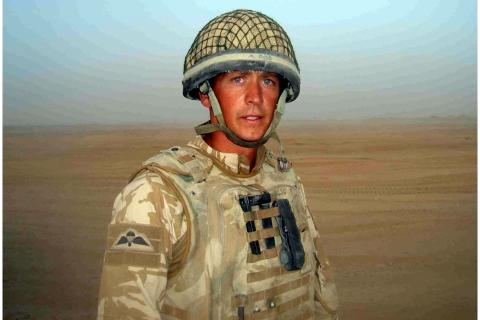