Pte Daniel Regan was the son of Peter and Rose Regan of Bradford Yorkshire.

He served briefy with The Sherwood Foresters before his transfer to Airborne Forces in 1944 and qualified as a military parachutist on Course 136 which ran at RAF Ringway from 2 to 15 October 1944.

Daniel was posted to A Company, 13th Parachute Battalion, as a reinforcement after their Normandy campaign.

He deployed with the battalion to the Ardennes and was killed during the first day of the Battle of Bure as A Company mounted an attack to secure the village. 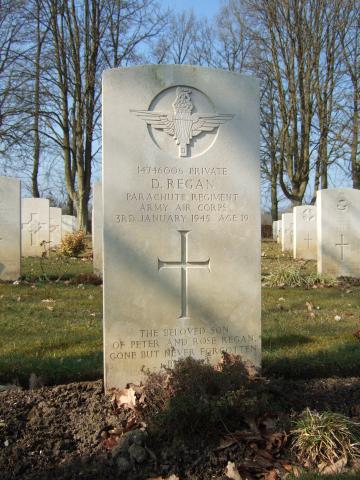 Paul Ryder said:
RIP Danny. I was brought up to believe that Danny was best friends with my Great Uncle Pvt Alfred Shingler. They trained, served, and died together and are buried 2 plots away from each other. Visited both when we last went to Horton - hoping to visit again next year.
Add your comment