Cyril Calvert was born in 1919, the son of Joseph Sydney and Florence Calvert, of Hutchington, Middlesbrough; and husband of Madge Calvert, of Norton, Stockton on Tees. No relatives have been traced by the Double Hills Memorial Group and nothing else is known of his pre-service life.

It is known that Sapper Calvert sailed with the 9th (Airborne) Field Company Royal Engineers from Gourock, on the River Clyde on 16 April 1943, in the liner Boissevain bound for North Africa. On 9/10 July 1943, the Company, as part of the 1st Airlanding Brigade, was engaged in Operation Ladbroke, the first of two hazardous glider landings in Sicily. Some men from the 9th assisted in the capture of the Ponte Grande bridge near Syracuse and others in the Company dealt with coastal defences which could be an impediment to the main invasion force. After being relieved by the advance spearhead of the invasion force, on 16 July, they were taken back to Tunisia in Infantry Landing Craft.

On 8 September 1943, the whole Company sailed from Bizerta in the American cruiser U.S.S. Boise for Operation Slapstick, as part of the invasion of mainland Italy, and during the voyage they learned that the Italian forces had capitulated. They landed at the port of Taranto and for the next month they carried out various tasks including repairs to the dock and mine clearance. The 9th later moved forward with the advancing forces and on occasions small parties operated behind enemy lines cutting railway lines thereby denying the Germans reinforcements and supplies. While in Italy Cyril Calvert worked alongside Frederick Davis and two other sappers on mine clearance under L/Cpl Maurice Knight. Fred Davis was to be in the same glider as Cyril when they flew out to Arnhem.

The 9th returned to the UK in SS Duchess of Bedford, landing at Liverpool on 12 December 1943 and moved to Lincolnshire. Company H.Q. was in the village of Tattershall and their billets were in the nearby village of Coningsby. The Company soon became involved in a series of exercises in preparation for the invasion of Western Europe. In May 1944 the 9th moved south to Hurn in Hampshire to prepare the airfield for Operation Overlord (D Day). They extended the runway and carried out other construction work before moving back to Lincolnshire in early June. A number of planned airborne operations were abandoned before the Company was finally redeployed in Operation Market (the Airborne element of Operation Market Garden).

Just after 10.00 hours on Sunday 17 September 1944 sixteen glider and tug combinations took off from RAF Keevil for Arnhem as part of Operation Market Garden. Horsa Glider RJ113 (Chalk 389) was in this group of aircraft and contained 21 men, including Sapper Calvert, from No 1 Platoon 9th (Airborne) Field Company Royal Engineers. The glider was flown by S/Sgt L J Gardner and co-pilot Sgt R A Fraser from D Squadron, The Glider Pilot Regiment. It was towed by a Short Stirling, No. LK 148 of 299 Squadron, 38 Group.

As a result of the explosion on board Cyril Calvert and his comrades became the first casualties of Operation Market Garden. He is commemorated on the Double Hills memorial at the site of the crash along with the other 22 occupants of the glider.

Sapper Calvert died on 17 September 1944, aged 25 years old. He is now buried in plot Y.282 at the Milton Road Cemetery, Weston Super Mare along with other soldiers killed by the crash. 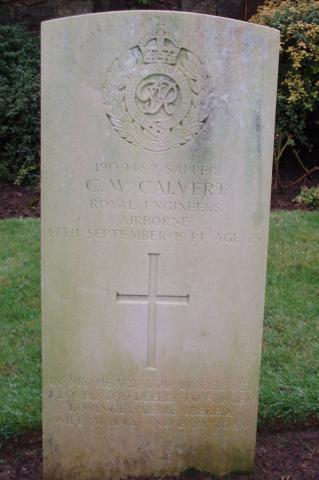