Corporal Cyril Dark was a cook, from the Army Catering Corps, attached to the 225th Parachute Field Ambulance, RAMC who was tasked with setting up a field kitchen for the unit in Normandy on ‘D’ Day, 6 June 1944. This was probably as part of the 5th Parachute Brigade’s allotment of gliders, chalk numbers 29-36, flown from RAF Brize Norton. They were Horsa gliders piloted by ‘B’ Squadron, The Glider Pilot Regiment.

Corporal Dark’s glider landed intact on LZ ‘N’ and he proceeded to Ranville where the main part of the Field Ambulance was to be established. After he had been in Normandy a few weeks he wrote a letter home:

It was grand to have two letters from you, and I must say it was grand to have one from you Reg, and thank you very much for the “cigs”. We do get a fair amount, but they came just as I was getting short. Anyhow, how are you all getting on? I do hope Mr. Penning is better, he must be well again by the time I get back from this operation and have a good few brown ales, as a matter of fact I’ve almost forgotten what it is like. Well my dears, I’m sure you would like to know this bit: I arrived in this country on D-Day at dead on 3.30 in the morning. It was quite a good trip except for the last 10 yards (By the way it was in a glider) when we hit a post and took our front wheel off, and the noise dug into the earth, but God was with us and the only damage done to us was our ‘clobber’ we were wearing, but we soon got new. I will give you all the ‘dope’ when I get back.

Well my dears must ‘dry up’ now, duty calls. Looking forward to the next letter from you.

All my love to everyone, 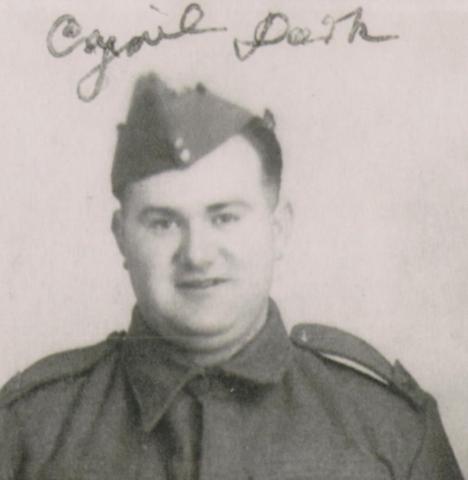