Cyril Weightman was a talented footballer and played for Notts County before the war. He was a member of South Nottingham Hussars (TA) before joining the Royal Artillery and serving in North Africa.

He volunteered for airborne forces and qualified as a military parachutist on course 90 which ran at RAF Ringway in November 1943. The course instructors report read 'Pte Weightman: Worked hard, reached a good standard’. Pte Weightman was then posted to the Medium Machine Gun (MMG) Platoon, 12th (Yorkshire) Parachute Battalion.

His grandson Paul Davis, who also served in the Paras,  recalls that while at Hardwick Hall ‘Granddad took every opportunity to see my Grandma 16 miles away in Bulwell Nottingham when he was allowed (and many times when he was not!). He told me he would quite often go over the wire, pinch a push-bike and cycle home. Then cycle back for first parade, throwing the bikes in the large pond in the grounds of the Hall. [A story heard many times by museum staff!]

In June 1944 he parachuted from a Stirling converted bomber into Normandy on D-Day, landing up to his neck in water in one of the many fields that had been flooded by the Germans, twisting his ankle during the process and then eventually discovering he was about 12 miles from where he should be, he later told me he had been introduced to the crew of the Stirling who were Australian and had never dropped Paras before!'

Cpl Weightman fought at Breville and later Le Mesnil until 12 Para Bn were eventually sent back to England on 4 September. He later told his grandson that when he returned to his barracks in England he ‘sat on the end of his bed sobbing at the sight of all the empty cots’.

Cpl Weightman went on to serve in the Ardennes, the Rhine Crossing and Malaya where he supervised the surrender of the Japanese at Changi jail in Singapore.

Cyril Weightman died on 5 June 2001, exactly 57 years to the day from emplaning for Normandy and then jumping out of a hole in the floor of a Stirling over Nazi occupied Europe. His coffin was carried by his grandson Paul Davis and his friends in their Para uniforms; it was draped with a union flag and carried his beret and medals. A bugler played the last post.

Compiled with the assistance of Paul Davis 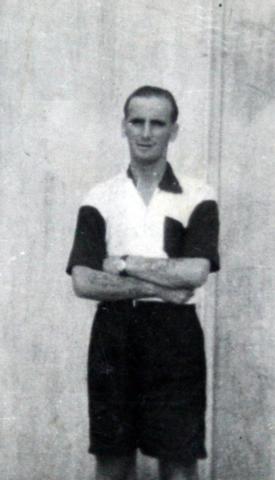