'Pat' Hastings was granted an emergency commission  with The Royal Artillery on 23 May 1942 and later volunteered for airborne forces.

He qualified as a military parachutist on Course 94/95 which ran at RAF Ringway from 6 to 20 December 1943 and was posted on completion of the course to 150 Field Regiment RA. With the Normandy landings imminent, he was then posted  as a Forward Observation Officer for 6th Airborne Division.

For part of the Normandy campaign he was allocated as the FOO for 434 Battery in 150 Field Regiment RA.

He had been promoted to Temporary Captain by the time he took part in the Rhine Crossing and the Advance to the Baltic and  was awarded a Mention in Despatches for his actions, reported in the London Gazette on 4 April 1946.

He was medically discharged from the Army on 24 March 1947 as a result of injuries received and granted the honorary rank of Captain. 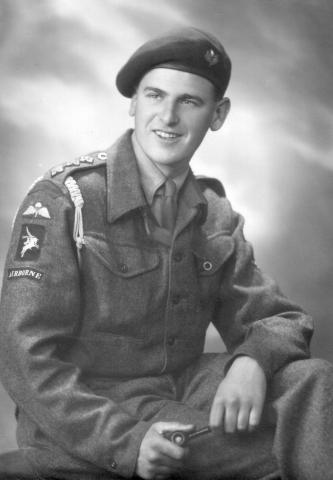