Company Sergeant Major Beckett, known as 'Tom' in the Army, was born on 20 February 1974 in his home town of Peterborough.

He joined the Army in July 1990 and was posted to 3 PARA on completion of his training. A strong performance on the Anti-Tank Cadre in 1993 saw him take the first steps down a specialisation in which he would become a master, leading Anti-Tank soldiers at nearly every rank.

Company Sergeant Major Beckett's outstanding command ability was recognised early and he moved up the ranks swiftly, excelling on Anti-Tank and rifle command courses as he went, all fitted around operational deployments to Northern Ireland and Kosovo.

It was as an Anti-Tank Section Commander that he deployed to Iraq during the first Operation TELIC in 2003 but he had been promoted by the time he deployed as a Platoon Sergeant with C Company on Operation HERRICK 4, 3 PARA's first deployment to Helmand in 2006.

He was soon back in Afghanistan on Operation HERRICK 8, again at the forefront commanding his soldiers, this time as a Fire Support Group Second In Command during 3 PARA's tour as Regional Battle Group South. After promotion to Warrant Officer Class 2 in 2009, Company Sergeant Major Beckett took over as Company Sergeant Major C Company in the vital lead-up to operations. It was in this most challenging role that he deployed to Afghanistan in October 2010 as part of 3 PARA Battlegroup, Combined Force Nad-E-Ali (North).

An inspirational and iconic leader with a staggering amount of operational experience, Company Sergeant Major Beckett was known and respected across the Parachute Regiment. In a career that spanned two decades, he spent only a handful of months away from the Battalion in which he was a central figure, one of the Non-Commissioned Officers that make up its unyielding core.

Company Sergeant Major Beckett deployed to Afghanistan on 15 October 2010 as Company Sergeant Major C Company, 3rd Battalion The Parachute Regiment (3 PARA). He was based at Patrol Base FOLAD in the Nad-e Ali District of Helmand Province. On the morning of 5 February 2011, he was deployed on an operation to interdict the movement of insurgents into Shaheed, a village on the Nahr-e-Bughra canal where C Company have been developing a protected community.

At 0834 Company Sergeant Major Beckett was fatally wounded by an improvised explosive device which detonated as he was moving into position to cover his fellow patrol members. In C Company, his company, and within the Anti-Tank specialisation his contribution of over 20 years of service is the stuff of legend and he will be profoundly missed. He leaves behind his parents Del and Kim and his wife Rachel who is expecting their first child mid-February 2011.

REPATRIATION REPORT Thursday 10 February, 2011 From operations in Afghanistan, the repatriation of: 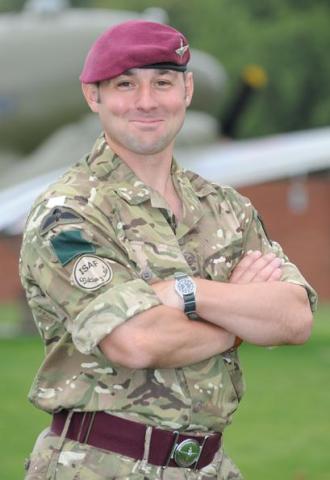 Jon Baker said:
From Worthing PRA:
All our condolences and heartfelt sadness at this time for Colin’s family,from his ex Para Band of Brothers here at Worthing PRA West Sussex.
Malcolm Rowlands said:
From West Berkshire PRA:
We mourn the loss of such a fine airborne brother. Our hearts go out to Colin's family at this time of devastating sadness. May you rest in peace, Colin.
David Shearwood said:
Rest in peace Colin and to his family our thoughts are with you at such a sad loss of such a dedicated member of the brotherhood.
From all members of BAFA and all ex Pom Para in OZ.
Dave Shearwood
secretary
BAFA
Paradata Editor said:
From Richard v Reij, former Dutch Marine Sgt in Arnhem, Netherlands:
'My condolences to the family of Colin and especially his wife. It's a big loss of a man of honour. Today (10 Feb 2011) the flag of the Airborne Division is hung at my place at half mast to honour Tom. God Bless.'
Stuart Cook said:
From Grimsby & Cleethorpes Branch P.R.A.
We send our condolences and deep sympathy to the family and friends of W.O.2 Beckett. A true Airborne soldier and leader of men. May you rest in peace.
Add your comment