Clifford 'Ginger' Palfreeman was born in Bradford in December 1911. He married Jane Palfreeman (nee Cummins) before he began his service career.

He joined the Army with the Royal Engineers as a Driver in June 1942, and was posted to the Depot Coy of 2 Motor Transport Training Depot. Royal Engineers soon afterwards. After a brief posting with 857 Quarrying Coy RE, he was posted to the Glider Pilot Regiment at Tilshead, Wiltshire, in late November 1942. He completed his initial training and transferred to the Army Air Corps during December 1942.

Clifford was posted to the 1st Battalion Glider Pilot Regiment and by mid-June 1943, he was sent to North Africa in support of the 1st Airborne operations in the Mediterranean. After several months in the field, he returned with other glider pilots and much of the rest 1st Airborne Division, embarking for the UK on Boxing Day 1943.

In September 1944, now a War Substantive Sergeant, it is believed Ginger Palfreeman was employed as a towmaster with 14 Flight F Squadron, 2nd Wing GPR, part of the ground crew preparing tug transports and their gliders for takeoff. He took part in the Battle of Arnhem, during Op Market Garden, by stowing away on one of the gliders on 17 September 1944. He managed to escape at the end of the Battle, returning across the Rhine.

Clifford later took part in the Rhine Crossing, during Op Varsity, and was awarded a Mention in Despatches in April 1946 for his actions.

After the end of the War in Europe, Clifford married his second wife, Winifred Alice Keats after being widowed during the war in August 1945, and was transferred to the Glider Pilot Regiment Depot in May 1946. He was finally demobbed at Larkhill, Wiltshire and added to the Z List Territorial Army Reserve in late September 1946. 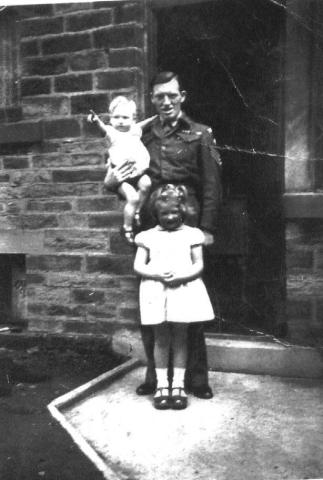