Clifford 'Cliff' Leslie King, was born in Plymouth, Devon in May 1923. Cliff was educated at Chepstow school before joining the Army at just 14 years old in the late 1930s.

Cliff joined the Royal Electrical and Mechanical Engineers, and during his time in the Army he became known universally as 'Nosmo', on account of being a non-smoker.

Cliff volunteered for service with Airborne Forces early in the war and trained to become a pilot with the Glider Pilot Regiment, and initially qualified as a Second Pilot. In June 1944, he took part in his first operation for Operation Mallard, on the evening of D-Day, 6 June 1944. Sgt King was second pilot to SSgt Geoff Bright, bound for LZ W to the West of the Caen Canal, carrying men of the 2nd Battalion, Ox and Bucks Light Infantry.

Successfully completing the operation, he returned to action in September 1944. Now part of 17 Flight, A Squadron, he flew to Arnhem as SSgt Bright's second pilot once more. Horsa Chalk No 929 took off from RAF Tarrant Rushton as part of the Second Lift on 18 September 1944, to landing at LZ X with a cargo of equipment and personnel of 250 (Airborne) Lt Comp Coy RASC. After playing his part in the Battle, he was one of the few to escape from Arnhem, returning to Allied lines across the River Rhine.

With numbers depleted, at Arnhem especially, and with significant operational experience, Cliff was promoted to Staff Sergeant, and made a First Pilot on his return to the UK. The following spring, he completed his third Airborne operation, flying on the Rhine Crossing, for Operation Varsity. It is likely he was also part of the Advance to the Baltic which followed on from this operation.

Cliff King lost several close friends who were killed in action during the conflict. SSgt Dan Daniels and Sgt Pattinson,also 17 Flight, A Squadron, were both killed at Arnhem, whilst SSgt Bright was killed on the Rhine Crossing operation.

After the end of the War in Europe, SSgt King remained in the Army, and was deployed with 6th Airborne Division to Palestine, as part of D Squadron, 2nd Battalion GPR before being demobbed in the late 1940s.

Cliff King died in 1991. He is now buried at Horrabridge in Devon. 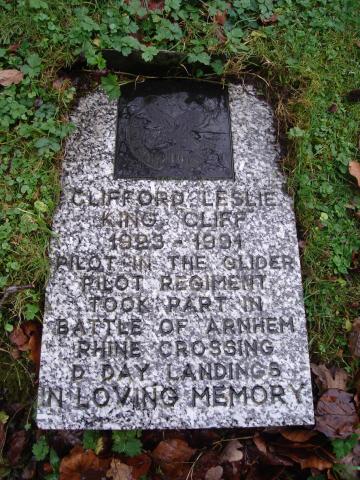