He served with 156 Para Bn in North Africa and Tunisia and when they landed in Italy with the 1st Airborne Division in September 1943 and spearheaded the advance from Taranto to Bari.

Sergeant ‘Cliff’ Brownlow jumped into Arnhem on Operation Market Garden on the second lift on 18 September 1944 with Machine Gun Platoon, 156 Para Bn and was wounded in both arms on the Drop Zone (DZ). After being taken a Prisoner of War, German stretcher beaers transported him to the hospital at Apeldoorn. German interrogators accused him of being a senior British officer, due to the fact that he was wearing a homemade roll neck cable knit sweater that he mum gave him. They believed no ordinary soldier would go into battle wearing such a garment.

In January 1946 Sgt Brownlow went to an Officer Cadet Training Unit and was granted an emergency in October 1946.

Lieutenant Brownlow retired with the honorary rank of Captain in 1950. 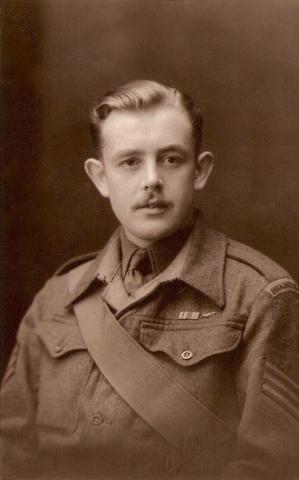