Denis ‘Bucky’ Boiteux-Buchanan, who was a racing horse trainer in civilian life, enlisted for military service in 1940 and was subsequently commissioned into the Queen’s Own Cameron Highlanders following his training at Sandhurst.

In 1942 he transferred to the Parachute Regiment and jumped with the 2nd Battalion at Depienne on 29 November 1942 as a platoon commander in C Company (Operation Torch). The battalion’s objective was to destroy enemy aircraft on an airstrip at Oudna twelve miles away and then to link up with the 1st Army at St. Cyprien. Part of his platoon landed some distance to the south. As a result Bucky was ordered to remain at Depienne collect his missing section, complete the salvage of parachutes, and guard the injured until elements of the 1st Army could relieve them. Thereafter he was to proceed north to re-establish contact with his battalion.

Crucially, the advance of the 1st Army was delayed by 48 hours leaving them isolated and vulnerable 60 miles behind enemy lines with a heavy German presence in the area; the battalion CO estimated that at one point 2 Para were outnumbered by 4 to 1. Bucky’s platoon took up positions around Depienne village and they were soon attacked by tanks and the 5th German Parachute Regiment. After a short battle they were forced to surrender in order to protect the wounded. The German Paratroopers helped to patch up the wounded; however, with the platoon’s surrender the German commander (Lt. Col Koch) and his 2nd in command left Depienne to try and catch Lt. Col. Frost and the remainder of 2 Para, leaving the British prisoners guarded by a group of Italian soldiers.

According to the testimony of L/Cpl Cadden (which has been challenged), another German officer arrived shortly after Koch's departure and decided that the British Paras including Bucky should be executed. They were marched into a farmyard and lined up against a wall with a machine gun placed just ten yards away. Bucky stepped forward and asked the German officer for permission to shake hands with the men. As he shook hands with them he said “Don’t forget when I step back into the ranks, give them the V sign and let the bastards see that we are not afraid of them”. When he stepped back into line the men duly all gave the V sign. The German officer lost his temper and shouted at the machine gunner to open fire. Fortunately for the British prisoners Lt. Col. Koch returned at the very moment that the execution was about to take place. Without even waiting for his armoured car to stop, Koch dismounted with a running jump, kicked the machine gun over and pushed the gunner to one side while assaulting his fellow officer with a verbal tirade in German. Koch turned round to the British Paras and told them “You have no need to be afraid, gentlemen, you are paratroopers and brave men and we’ll look after you safely”.

The German paratroopers took the prisoners onto Tunis where they were temporarily held in cells within a fort awaiting onward transit. The following morning they were taken in groups for their ablutions. Bucky was in the last party to be taken up, when he got up the stairs he found some of his men in the barrack room with the Germans Paratroopers talking about how many jumps they had done! The Germans treated the British Paras like honoured guests lending them shaving gear and giving them cigarettes.

The next day they were taken to Tunis airport and flown to an Italian Prison Camp - Camp 66 (Capua), near Naples, from where he made an attempted escape with Lt. Kier of 1st Commando. He was recaptured and in the ensuing interrogation was struck in the stomach and over the eye with a revolver after refusing to disclose how he had obtained money and clothes for the escape.

On 18 March 1943 he was transferred to Camp 21 (Chieti) in the Abruzzo region, a few miles from the Adriatic Sea and close to the Pescara River. When the Italian armistice was signed the Senior British Officer (following Allied command orders) refused permission for the POWs to escape and even put on patrols to guard against any escape attempts. This proved to be a costly error of judgement; shortly after the Italian armistice the Germans moved into these camps and started removing the POWs to camps in Germany.

Fortunately, on the first day of arrival at this camp Bucky and other officers had started a tunnel. In an effort to evade the Germans, Bucky and 10 others went down the tunnel taking with them food and water. They found that the far end had been sealed up. Thirty six hours later they came up and made their way to the North bank of the Pescara River. They were picked up by Capt. Lee (SAS) who had a plan which did not materialise for evacuating 300 ex POWs. Later ‘Bucky’ continued on alone. He forded the River Sangro and at Villafonsina was rounded up as an Italian civilian and forced to dig slit trenches for two days during which time he was not fed.  He managed to recross the River Sangro and went back to San Lorenzo. When the Germans prepared to evacuate this town Bucky left dressed as a woman and reconnoitred possible means of getting through and eventually rejoined his unit at Barletta. Bucky was awarded the Military Cross for his bravery and efforts in assisting other POWS in Italy; his award appeared in the London Gazette on 27 April 1944.

On the 17th September 1944 he jumped with the 2nd Battalion onto DZ ‘X’ as part of the Airborne force tasked with taking Arnhem Bridge in Operation Market. As the Battalion Intelligence Officer he was often in the thick of the action with Lt. Col. Frost. His interrogation work promptly alerted his CO to the fact that the units facing 2 Para and Brigade HQ were from the respected 9th SS Panzer Division and other elements of the 2nd SS Panzer Corps, rather than the second rate troops they had been led to expect.

It is also known that he met up with Major Peter Lewis, when C Company, 3rd Parachute Battalion, arrived at the bridge as reinforcements. He instructed Major Lewis where to deploy his platoons in support of the 2nd Battalion.

He was killed in fighting at the bridge on 20 September 1944 and is buried at Oosterbeek War Cemetery, Arnhem. 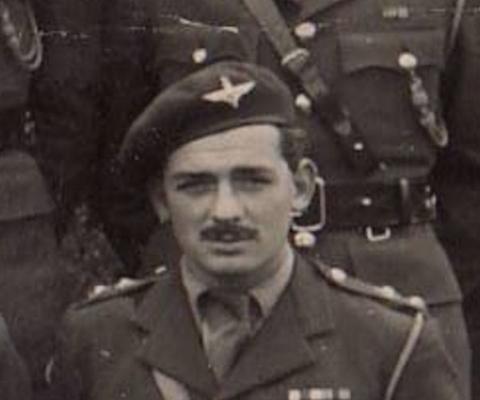