Claude Gronert was born in 1923, the son of Robert and Lylie Gronert of Carn Brea, Cornwall, and had a twin brother named ‘Tommy’.

They both initially enlisted into The Hampshire Regiment before volunteering for airborne forces and attending parachute course 63 at RAF Ringway, which ran from 4 to 17 May 1943. His instructors’ comments, “Has jumped well”, were exactly the same as those made about his brother! Upon completion of the 8 jump course they were sent as reinforcements to the 1st Parachute Brigade, then based in North Africa, and posted to the 2nd Parachute Battalion.

The twins saw service in the Italian campaign, September – November 1943. After returning to the United Kingdom in December, they were posted to 6 Platoon, B Company of the 2nd Parachute Battalion, which was commanded by Lieutenant Peter H Cane.

On Sunday 17 September 1944, ‘Tommy’ and his brother Claude parachuted onto DZ (Drop Zone) X near Heelsum in Holland as part of Operation Market Garden. B Company was the second company to move off from the RV (Rendezvous Point) once the majority of the battalion had cleared the DZ. Later that day he was killed in action, along with his brother, in the railway yard of the Lower Oosterbeek Station, near the under-pass.

Pte Claude Gronert was initially buried at the junction of the Benedendorpsweg and Klingelbeekseweg railway viaduct. He now lies at rest in the Arnhem-Oosterbeek War Cemetery, in plot 18 A 18. His brother, ‘Tommy’, is buried next to him, in plot 18 A 17. 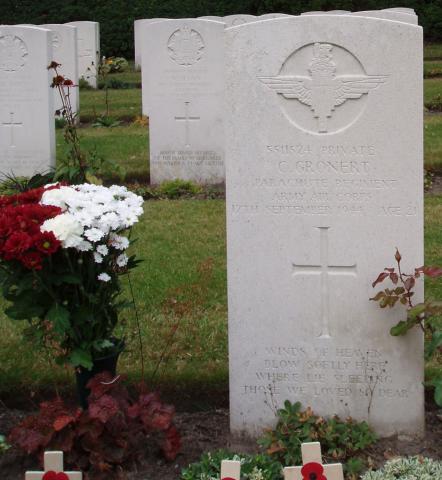