Chris was born on the 23 July 1919 and christened Christopher Johnson Bage. His father was George Heslington Bage and his mother was Sarah (nee Clasper). Chris was the second one of twin boys, his brother Thomas preceding him into the world. They had an older sister Margaret Smart Bage who was twelve years older than they were. George was in work and Sarah kept house and looked after her family as best she could in those very difficult times just after the Great War.

Sarah and George had lost five of their 8 children due to illness by the start of WW2. However, the twins survived through those difficult years when poverty often led to disease that could so easily strike and wipe out whole families. Little did George and Sarah know, at the birth of Thomas and Christopher, that their surviving twin sons at just 20 years of age, would have to endure the ordeal of a long and bitter war when in the prime of their lives.

The lads had grown up in the poor, rundown riverside area of South Shields in County Durham on the North East coast of the UK. They attended St. Stephens Junior School and later went on to Baring Street Seniors which were located nearby.

During their spare time Chris and Tommy took part in their favourite sports of football and cricket, and joined the local Harton Cricket Club, and this led to many enjoyable outings to places like Horden Colliery, Boldon and other Tyneside places. The Harton Colliery Club had a good ground and there was often tea and cakes supplied by members' families for everyone to enjoy.

Cycling was another pastime that they enjoyed and they would often cycle to nearby Boldon Colliery to meet friends there. On leaving school Chris and his brother Tommy got labouring jobs on a building site next to Harton General Hospital in South Shields where they worked with their dad. Just before the start of the war they had jobs as labourers in a timber yard on Tyneside.

The year was 1939 and it looked like war was imminent. Most plans made at that time would be drastically changed in the months ahead. Tommy and Chris were of eligible age for call-up to the armed forces and were very apprehensive about the situation.

War was declared and shortly afterwards the air-raid sirens sounded in South Shields for the first time, causing the residents to run for cover in the newly-built Anderson Shelters.

About January 10th, 1940 Tommy was called up into the army and told to report to the Training Camp at Auchengate, Troon, Ayrshire in Scotland. He joined the Highland Light Infantry and was posted to join the British Expeditionary Force (B.E.F.) in Rouen, France.

225 Parachute Field Ambulance was formed at Castle Cary in June 1943, taking its name from 225 Light Field Ambulance, of Guards Armoured Division which had been disbanded in January that year. The 225 Para Field Ambulance would be attached to 5th Parachute Brigade, of the new 6th Airborne Division.

After extensive training, 225 PFA first saw action during Op Overlord, sent to Normandy in support of 5th Parachute Brigade. The Brigade had been tasked with seizing, and holding bridges over the River Orne and Caen Canal near Ranville and Benouville, secondly to secure and hold the area around these two villages and that of Le Bas de Ranville, where 225 would establish their Main Dressing Station (MDS).

225 PFA dropped into France at about 0120hrs on the morning of 6 June 1944. By around 0230, most had reached the unit successfully and joined the rear of the 12th (Yorks) Parachute Battalion heading for Le Bas de Ranville. Here they commandeered the local chateau and established their MDS by about 0400hrs, with the first casualties arriving soon afterwards. The Sections attached to the Battalions tasked with securing the Bridges (including the Caen Bridge - later known as Pegasus Bridge) after initial glider landings, had faired rather worse. Conditions were worsened by sporadic sniper fire around one temporary Aid Station, whilst another Section suffered relatively heavy casualties during the initial drops.

On the 6th June 1944 during the invasion Chris was wounded in the thigh (bum) when he landed and was captured by the Germans and moved to a prison camp.

According to his brother Tommy, when Chris was at the prison camp the commandant’s wife went into labour and they couldn’t find the German doctor so they got Chris and he delivered the baby. The commandant then gave better privileges to him and the prisoners.

Tommy received a letter from Chris 25.10.1945 when he was back in the UK and at Catterick Camp in Yorkshire. After the terrifying experience Chris had been through in France and Germany he said in his letter he was feeling a little scared, “Everything is just about ready for Nov.17th and I can tell you I feel a little scared at the prospects of having to go through a marriage ceremony”

Continuing with his letter he sounds like he is still feeling imprisoned back in the UK. He said, “I have just finished a week’s fire-picquet. It was pretty deadly as we are not allowed to leave the vicinity of the hospital with the result I could not get to the pictures or even go up to Sandes Homes which are only about five minutes from the main gate.”

The Meaning of a ‘Fire Piquet’

Fire Piquet was considered a reasonable 'sleeping duty', providing it didn't go all Pete Tong and you didn't have to put out fires.

Sandes remains faithful to the same vision of providing friendship and support for the military community as a witness and practical expression of the Christian faith.

The Centres fulfil a distinctive role being seen as a neutral, non-military space within the army camps. They provide catering and recreational facilities along with quiet areas for people to unwind and relax in a homely atmosphere

After leaving the army Chris became an active member of the Salvation Army and this may possibly be attributed the Sandes influence that he experienced.

Once back home in the North East of England Chris worked as a nurse for forty years at the Preston Hospital in North Shields, Northumberland where he was highly regarded. Whenever a family member talked to a former patient of the hospital, they would give a glowing report about Chris. Every Christmas for many years an anonymous person would leave him a present of a bottle of sherry at the Hospital Christmas tree as a thank you.

Months before he passed away Chris had fallen and broken his hip. A few day's later his twin brother Tommy was admitted to the same hospital after falling and with a broken hip and the same side as his brother. Chris died on the 5th April 2004 and Tommy died on the 12th Oct 2004. 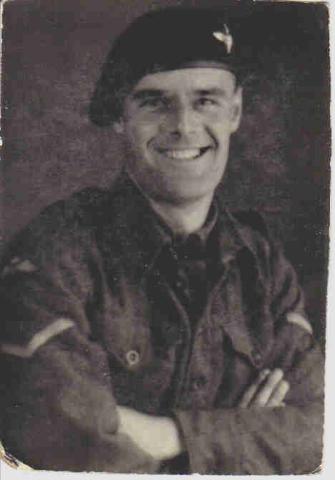