Christopher Jack Walton served with the 5th Battalion Home Guard from May 1941 until May 1943, when he was called up for war service with the Royal Fusiliers.

He undertook his basic training at Brentwood in Essex and on completion, sought selection for the Parachute Regiment. He attended the selection process at Bury St Edmunds and volunteered  to join the Regiment.

He attended Course number 87 at Ringway in Manchester from 13th - 25th October 1943. After a satisfactory completion, he was posted to the 9th Battalion The Parachute Regiment in late October 1943.

He was initially posted to A Company but subsequently transferred to the machine gun section, where he was the number two on a Vickers Machine Gun.

He formed part of the burial party when his Battalion came across the aftermath of the Bande atrocity, which took place on 24th December 1944. 34 young men, aged between 17 and 30 were executed by the German SD, as a reprisal for an earlier attack by the Maquis, where three German soldiers lost their lives.

His aircraft was destroyed over the DZ during Op Varsity and was subsequently captured by German Fallschirmjäger. He was incarcerated at Stalag X1b in Fallingbostel, Germany and remained a prisoner until the end of the war. He was repatriated in June of 1945.

The wounds suffered at Operation Varsity were such that his medical classification was downgraded and he was deemed unfit for parachute duties. He was transferred to the Royal Army Service Corps until his demobilisation in 1947. 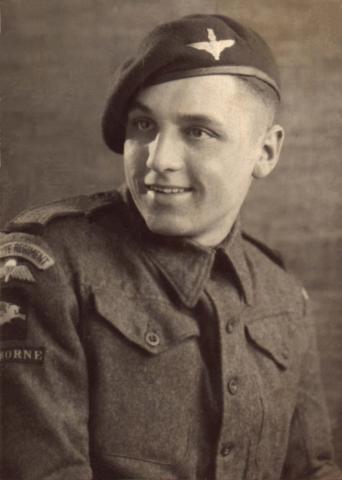