I reported for duty at 1 PARA following commissioning from Sandhurst in April 2000. Following 18 months as OC 7 Platoon, I did a brief spell as 2IC C Coy. With 1 PARA, I deployed on operations to Dungannon, NI and on exercise to Kenya (EX GRAND PRIX) and Brunei (Jungle Warfare Instructors Course).

In April 2002 I was posted to PARA Coy, ITC Catterick where I was OC of 682 Platoon and 3 x AFC Platoons. In October 2003 I was posted as Mortar Officer to 3 PARA. After completing the Mortar Officers Course in Warminster, I deployed to Northern Ireland as part of the marching season and conducted public order operations in Belfast in the summer of 2004.

In Aug 2005, I was posted as Adjutant 3 PARA and deployed, under Lt Col Stuart Tootal, to Afghanistan on Op HERRICK 4. In September 2007 I was posted as Acting Major to ITC Catterick as OC PARA Coy.

Following promotion to substantive Major, I attended Staff College at Shrivenham to complete ICSCL in January 2009. For my initial staff appointment I was posted to HQ 16 Air Assault Brigade as SO2 AB Plans / ISTAR and deployed on exercise to Kenya and the USA and then to Lashkar Gah, Afghanistan on Op HERRICK 13.

On return, I was selected for command of a rifle coy and was posted as OC C (Bruneval) Coy in 2 PARA from July 2011 to July 2013. During this tour, 2 PARA was assigned the Air Manoeuvre Battle Group role for 12 months during which C (Bruneval) Coy was designated the lead airborne company group. During my two years of command, the company deployed to Ukraine on Ex RAPID TRIDENT (July 11), ran the security at the Stratford City gates at the London 2012 Olympics (July and August 2012) and the Falkland Islands on Op FIRIC (September - November 2012).

Following command, I was posted as Career Manager of the Parachute Regiment and Royal Gurkha Rifles' DE Officers at APC Glasgow from July 2013 to June 2015.

I was then lucky enough to be selected as 2IC 2 PARA and returned to Colchester in June 2015 to serve under Lt Col Ollie Kingsbury. Initially slated for Op HERRICK 18, 2 PARA fell off the ORBAT as reductions in Helmand increased. The Battalion completed its regular tour as Air Manoeuvre Battle Group and, despite missing out on Ex ASKARI STORM in Kenya, managed some arduous dry and live firing training in Otterburn and Salisbury Plain. Half way through my tour, Lt Col Duncan Mann took over CO and I saw out my posting with an exchange visit to the Czech Republic's airborne battalion.

On leaving 2 PARA in Sep 2017, I deployed to the Middle East on a 6 month deployment on Op INHERENT RESOLVE at the Special Operations Joint Task Force. There I served in the J5 Plans branch and headed up the Syria desk. In May 2018, I then returned to APC Glasgow, in another personnel role as COS in the Career Management Operations branch helping to coordinate promotion and assignment boarding in the APC. Whilst at APC, I was fortunate enough to get selected for promotion to Lieutenant Colonel and was posted as SO1 DS at the Intermediate Command and Staff Course (Land) at the Defence Academy in Shrivenham. As I arrived there in Mar 2020, the COVID-19 crises erupted and I was seconded to the Standing Joint Force Headquarters in Northwood, as SO1 J3 Ops, and helped to run Op BROADHSHARE: the FCO and UK Defence's operation to support the British overseas territories in the Caribbean. Despite my best efforts and constant escape planning, I have remained unsuccessful at getting deployed forward!

Written by CJ Prior 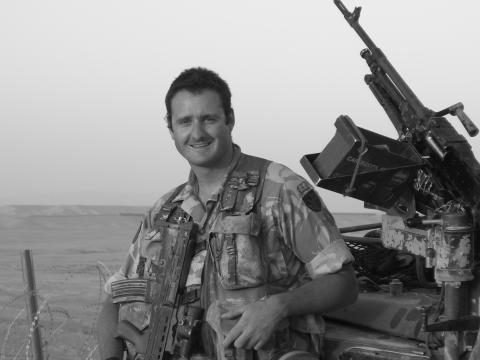