Chris Dent was commissioned into The Parachute Regiment in 1974 and his postings, prior to becoming  second in command A Company  2 PARA, included a tour as a platoon commander with Junior Parachute Company.

His wife Cathy, also an officer in the British Army with The Royal Army Medical Corps, had given birth to their son, Robbie, only months before his deployment to the Falklands in 1982.

The Battalion was first ashore on 21 May 1982 and dug in on Sussex Mountain above San Carlos, with a bird’s eye view of the continuous bombing attacks on the ships below. 2 PARA was ordered to capture Darwin and Goose Green and set off on a beautiful clear evening.

The Battalion attacked on the morning of 28 May but by dawn A Company became pinned down in a gorse gully below Darwin Hill by very strong Argentine defences  .

Captain Chris Dent was killed instantly by enemy fire as part of an ad hoc assault group formed to secure a ridge dominating the gully.Two other members of the group were also killed: Capt David Wood and Cpl Chuck Hardman.

If you are part of Capt Dent's family and would like to complete this biography, you can apply to the curator to do so. To do this you will need to become a member of ParaData and select the 'friend or family member' option on the registration form. If you would like to find out more about becoming a member please visit our registration page. 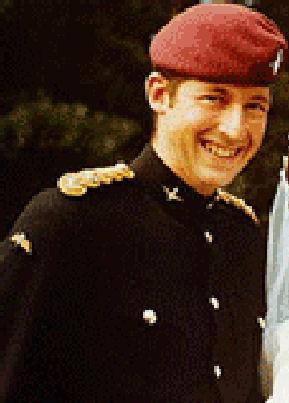 Thomas Crinnion said:
Chris passed selection and served with C Sqn. 23 SAS(V) before he joined the Parachute Regiment. He was a fit lad and a popular trooper.
Add your comment