Charles Richard Sanders first served with The Sussex Regiment, before volunteering for the airborne forces.

He successfully undertook his parachute jump training at RAF Ringway. Charles was a pupil on  Course 109, which ran from 27 March 1944 to 7 April 1944. His Instructor noted this about his performance during this training:

During Op Varsity he was injured on 4 April 1945, at either Harpenfeld or Holzenhausen

After the War Charles became a clockmaker in East London and married Betty.

Created with images and information kindly supplied by Richard Archer. 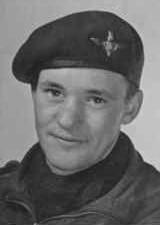