Charles Albert "Charlie" Pook was born in Hove, Sussex on 11 June 1916, the second son of 11 children with 5 brothers and 5 sisters. His father had been a cavalry man. Charles was a devoted husband, father and son, visiting his parents weekly. He had a wicked sense of humour and like to do practical jokes, crack jokes and see the funny side of everything. He was also very kind and generous including to the widow of a former boss of his. He was a proud and avid gardener, growing tomatoes, cucumbers and geraniums. Charles had no fear of heights and was able to run nimbly like a squirrel across roofs when he worked as a builder. Charles was quick tempered, tough and hard-working. His son, Robert recalls his father could carry 3 bags of cement at once. Each bag weight 1cwt.

After leaving school at 14, his first job was as a hod carrier working with his elder brother, a brick layer. During the first part of WW2 he was working as a bricklayer. During the Dunkirk evacuation he was working at the radar research establishment in Malvern, at Portsmouth during the Portsmouth dockyard Blitz and in 1941 he was extending the famous burns unit at the Royal Queen Victoria hospital at East Grinstead. He was helping to build airfields in Oxfordshire when he was called up. On 30 November 1940 Charles married Annie (nee Steele).

Charles was assigned to army initial training in 1942 at Cowley barracks and then posted to the first Bucks battalion and then onto various units until eventually serving with the Ox and Bucks second battalion. Then he was sent to the Airborne development centre at Amesbury Abbey where he took part in testing dropping supplies with or without a parachute and also how to load gliders, both the Horsa and Hamilcar types. While serving with the 3rd Para brigade he was part of Operation Varsity, the crossing of the river Rhine. Charles did not talk frequently about WW2 but he did mention several incidents. He travelled near to Bergen Belsen concentration camp and he said "you could smell it from miles away". On a lighter note, his unit surprised a group of Germans partying and Charles' officer made a German Major surrender to my him! Also, on one occasion they were going down the road in a Box Humber (see photos) , trying to time the salvos, got it wrong and the vehicle ended up with 17 shrapnel holes in the side which wounded their driver and the rest of them finished in the ditch. The unit finished up at Wismar on the Baltic coast where they met some Russians my father was with his officer in a meeting in a room with Marshall Rokossovsky. At some point during WW2 Charles had become a batman.

After WW2 it is believed that he was part of the advance party of the 6th Airborne Division which was posted to Palestine. He then flew in a converted Halifax bomber via Castell Benito. Whilst in Palestine he took part in searches for illegal arms and was able to visit Damascus, Jerusalem, Cairo and also to go skiing in Lebanon. Charles and other members of his unit met the actor and Para Richard Todd in Palestine just before their voyage home to the UK.

Charles left the army in 1946 and returned to civilian life as a bricklayer then as a general foreman. Building projects he managed included Southwick shopping centre, 2 pubs, a church hall, an elderly people's home, a school extension and Lancing College sports hall. 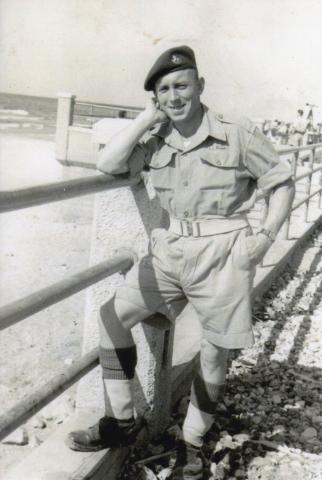