Charles Neville Bruce Dawson, born in August 1916, was the son of Edward Elliot Neville Dawson and Muriel Simpson Dawson. He married Sheila Mosley Dawson (née Mayne), of Guildford, Surrey, with whom he had two children.

Charles Dawson trained at RMA Sandhurst, and was commissioned to the Royal Berkshire Regiment a few days short of his 20th birthday in August 1936. By September 1939, he had become a Lieutenant. He served with the British Expeditionary Force (BEF) in France in early 1940. Despite an injury to the foot, he was fit enough to be evacuated from Dunkirk and was awarded the Military Cross in December 1940 for his conduct in France.

He continued to rise through the staff ranks as the war progressed. He had developed a friendship with Brig Hackett during the war. In the early part of 1944, Dawson was in a training role at a Battle School. After Hackett returned from the Middle East, a chance meeting with Brig Hackett over coffee at Fullers Coffee Shop in the Strand, Central London led Dawson to join Airborne Forces. Records indicate Dawson was appointed Deputy Assistant Adjutant and Quartermaster General (DAA & QMG) of 4th Parachute Brigade in April 1944, although this appointment may have been a temporary one, as 4th Parachute Brigade underwent as significant reorganisation of senior personnel in second quarter of 1944.

By September 1944, he had become the Brigade Major for 4th Parachute Brigade and took part in the Battle of Arnhem, during Op Market Garden. He was awarded a posthumous Mention in Despatches in September 1945 for his actions at Arnhem.

4th Parachute Brigade emplaned for Arnhem as part of the Second Lift on 18 September 1944, but Dawson, as Brigade Major had been sent as part of an advance part on 17 September. When the main force of the Brigade landed the following day, they did so after Dawson's advance party, supported by the gliderborne 7th Battalion KOSBs, had tried to clear the DZ in an attack on the southern end of a road embankment as the parachute aircraft formation ran in.

Major Dawson was killed during an attack in a wooded area on the outskirts of Arnhem on 20 September 1944, aged 27 years old. He is now buried at Oosterbeek War Cemetery, Arnhem.

Compiled with assistance from Niall Cherry and Bob Hilton 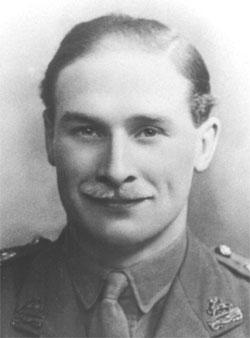