Charles Mackrell was born on the 30 October 1913, the son of Edward Maurice Mackrell and Mrs Mackrell (Formally Little), and came from Croydon, Surrey. [1]

He joined the 250th (Airborne) Light Composite Company, RASC on the 9 July 1942, and was assigned to ‘E’ Platoon. At this time the Company was still in the process of reorganising as an Airborne unit, and ‘E’ Platoon was a General Duties Transport Platoon. [1]

He went with the unit to North Africa in May 1943, where the rest of the 1st Airborne Division was joining up with the 1st and 4th Parachute Brigade’s.

It is not known if he took part in Operation ‘Slapstick’ in Italy in September 1943.

The Company returned to Liverpool, England in December 1943, and were transported to their new billets in Lincolnshire – initially to Dock Camp in Boston. However in February the Company moved to another location and the three Parachute Platoon’s, by now numbered No 1, No 2 and No 3, were billeted at Longhills Hall, just south of Lincoln.

As the planning for airborne operations after ‘D’ Day, on the 6 June 1944, developed No 3 Parachute Platoon was moved down to a Transit Camp at RAF Harwell, where they were to remain throughout August and then in September, they were moved to a Transit Camp at RAF Fairford. The plan would involve the main body of the Platoon (28 men) flying aboard a Horsa glider, and along with a Jeep Section carried in five other Horsa gliders, they were to support the 1st Airlanding Brigade.

Whilst the planning went on, and the gliders were either loaded or unloaded as the plans changed, the men were allowed short periods of leave, in small groups and Dvr. Mackrell was amongst a group allowed to go home after duties on the 19 August, to first parade on the 25 August.

On the 15 September the Headquarters RASC of the 1st Airborne Division ordered a change round of locations for the units of the Company and No 3 Parachute Platoon, which had been using Blakehill Farm Transit Camp and travelling to RAF Fairford every time they were ‘stood-to’ for an operation, and one of the Jeeps and its two trailers, of the Transport section, at Tarrant Rushton and having to drive to Keevil. They were now moved, so that the Platoon were at Keevil Transit Camp and would take off from RAF Keevil, and the Transport Section Jeep, two trailers and crew would be at Blakehill Farm Transit Camp and only have to travel a short distance to RAF Fairford.

Dvr. Charles Mackrell was with No 3 Parachute Platoon at Arnhem (Operation ‘Market-Garden’), under the command of Captain. ‘Bill’ Gell, and flew on Horsa glider No 479 with Capt. William ‘Bill’ Gell and his 27 man platoon on board, taking off from RAF Keevil, piloted by men of ‘D’ Squadron, The Glider Pilot Regiment, with the Stirling tug aircraft being from 196 Squadron, RAF It made it safely and accurately to Landing Zone ‘Z’ on Sunday, 17 September 1944.

Not long after landing Capt. Gell agreed with Capt. Capt. Cranmer-Byng of No 1 Parachute Platoon, that they should swap roles and that No 3 Platoon should follow the 1st Parachute Brigade Headquarters to Arnhem Bridge. There had been some problems with some of the Transport Section gliders, but at least two Jeeps, with four trailers of ammunition and supplies would also accompany them.

The Platoon, and their much reduced Transport Section, reached the Bridge area, under the command of Capt. ‘Bill’ Gell; “The ammunition that we brought with us to the Bridge in our Jeeps and trailers was, so it turned out, invaluable for the Units at the Bridge. Then, on orders from Major Hibbert, we took up a defence position on the North-West of the perimeter facing Arnhem Prison, and with Brigade HQ to our rear.” [3] The building they were placed in, was behind that of the Water Works Offices, and covered the perimeter from the North-West through North, to the North-East. The men were spread throughout the building.

They were to hold these positions for four days, until on the morning of the 21 September, Capt. ‘Bill Gell’: “We held our position constantly until, with the building we were occupying on fire and under heavy German attack, we were ordered to disperse in parties of ten men. I led the first party of ten to leave and was attempting to reach the rest of the Division, an impossible task, and we were taken prisoner on the Thursday. Lieutenant Daniells was to lead the next party, with Sergeant Brookes [Sgt. AS Hoye or Sgt. AWC Staples] leading the remainder. That was the last I heard of them. It is possible that we were holding the last position in action.” [3]

Dvr. Mackrell was made a prisoner of war and sent to Stalag 12A at Limburg in Germany, here he was issued with the POW Number. 91093. This was a Transit Camp and not a permanent POW Camp, but it is not known which camp he was moved to. [4]

He would have been released by advancing Allied Forces in April/May 1945.

Charles married Elizabeth Weight (1912 – 1960) on the 10 February 1934, at the Croydon Registry Office on Fell Road. At the time of the wedding Charles was living at 8 Rose Tree Cottage, Shirley Road, and was recorded as being a Domestic Chauffeur. After marriage and particularly during WW2, the couple moved to their home at 12 Mardell Road, Shirley, Croydon. They had one son, Maurice Charles Mackrell (1934 – 1988).  In 1962 he was a coach driver. During his free time, he volunteered for ‘Help the Aged’ and other charity organisations. Charles Maurice Mackrell died in 1969. [5]

Created with information researched by R Hilton and Maurice Weight. 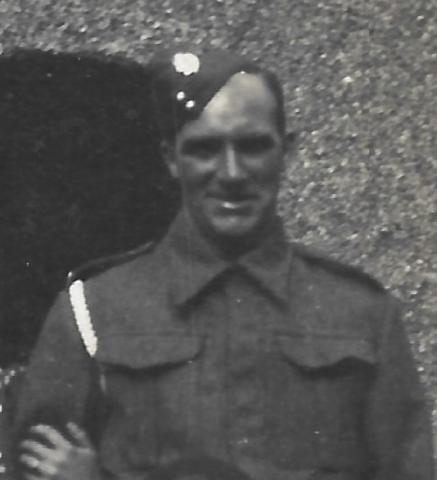