Charles Lewis Ellsworth was a Scot by birth, born in Glasgow in August 1917.

He trained in Aldershot and joined 5th (Scottish) Parachute Battalion, following completion of Parachute Course 26 at RAF Ringway in September 1942.

The Battalion took part in the North African campaign, and Charles was later sent to Italy, arriving onboard the seaborne invasion flotilla to Taranto on the East coast in September 1943. Later in the campaign he received a severe shrapnel wound near Monte Cassino, which eventually led to his evacuation by Hospital Ship to the UK. He ended up at the Hardwick Hall camp in Derbyshire.

At the Hardwick camp he met Vera Longbottom (a Sergeant in the Catering Corps, born at Conisbrough, Yorkshire). They were married shortly afterwards, in December 1945. After leaving the Army at the end of the War, they set up home together in Yorkshire. They lived and worked in Yorkshire for a time, resettling in Nottinghamshire and North Lincolnshire in later life. They had one son, Robert, born in Sheffield. 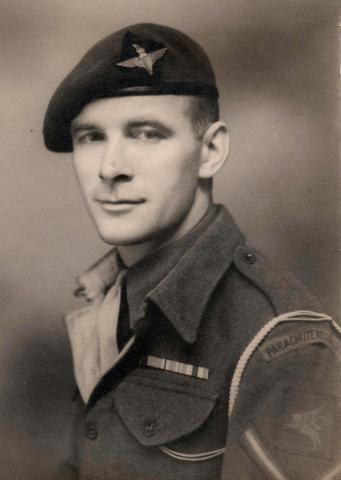