Charles John Vere Shoppee was granted an emergency commission with The Royal Warwickshire Regiment (RWR) in November 1941. He was serving as a War Substantive Lieutenant in 13th Battalion RWR, when it was turned over to airborne forces and redesignated as the 8th (Midlands) Parachute Battalion one year later.

At the end of the following month 17 officers, including Lt Shoppee, and 193 other ranks from the battalion attended parachute course 44, which ran at RAF Ringway from 28 December until 8 January 1943.

Shoppee had been promoted to Captain, and 2/ic A Company, by the time the 8th Para Bn jumped into Normandy.

He was wounded at the end of June but returned to the battalion after a short stay in the divisional rest area.

Shoppee took charge of A Coy in August and remained in command for the rest of the Normandy campaign. He was wounded for a second time during the battalion’s final engagement in Normandy at Beuzeville and was subsequently awarded a Military Cross for outstanding leadership and bravery.

His citation records: “At ANNEBAULT on the 20 Aug during the attack on the town, Major Shoppee’s company was pinned down by heavy machine gun fire. Major Shoppee showing a complete disregard for his own safety rallied his men and personally led an attack on a house which contained 15 of the enemy with three machine guns. By his leadership his men overcame the position and took the occupants prisoner. At BEUZEVILLE on the 26 Aug, Major Shoppee was in command of the leading company which came under Mortar and MG Fire. Major Shoppee immediately pressed home the attack and by his personal leadership succeeded in driving off the enemy and preventing the advance from being held up. Major Shoppee was wounded later in the day leading another attack against enemy positions. Major Shoppee’s conduct and leadership has been of the very highest order and he has shown a complete disregard for his own safety.”

Shoppee continued to serve with 8th Para Bn during the remaining campaigns in NW Europe in 1944-45. He commanded C Company during Operation Varsity for the Rhine crossing and the long advance into Germany.

He was formally decorated with the Military Cross by Field Marshal Montgomery at the end of April 1945 on Lüneburg Heath.

After the war Shoppee continued to serve with The Parachute Regiment and was granted a regular commission with the substantive rank of Captain, and acting rank of Major in May 1947. He remained in service until resigning his commission in April 1949. 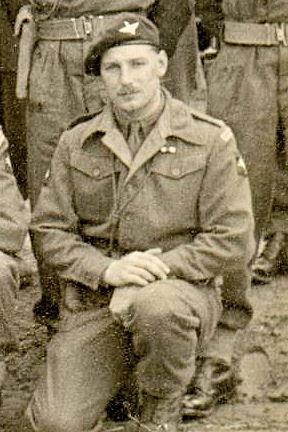