Sgt Charles Greene, enlisted into The East Yorkshire Regiment before volunteering for airborne forces in 1944.

He qualified as a military parachutist on Course 130 which ran at RAF Ringway from 21 August to 2 September 1944. The course report states: ‘A capable parachutist, has performed well’.  Sgt Greene was posted to A Company, 8th (Midlands) Parachute Battalion.

Sgt Greene saw active service in the Ardennes before taking part in Operation Varsity (Rhine Crossing), where he was killed on 24 March 1945.

He is now buried at the Reichswald Forest War Cemetery, Germany. 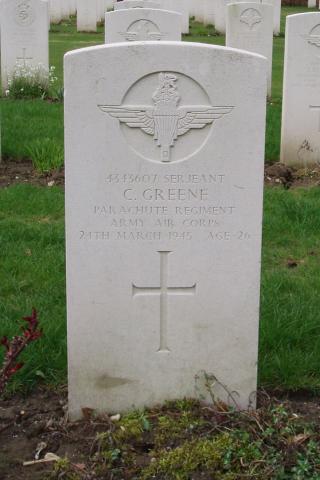