After volunteering for airborne forces, Private Wallam took part in parachute training course 44. The course lasted from the 28th December 1942 until the 8th January 1943. It was noted that he was "A very good performer. An excellent type".

Pte Wallam saw action in Normandy (Op Overlord) with HQ Company, 8th Para Bn. He was injured during the drop, hurting his chest and leg.

Later that year Pte Wallam transferred back to The Royal Warwickshire Regiment on 12th November 1944.

A request from Charles' nephew: I found this picture taken Benouville of 6th airborne meeting 1st special service brigade no. 4 commando my uncle charlie is in that picture behind Lt Col Alastair Pearsons backpack can anybody confirm that his alastiar pearson as my uncle charlie was best mates with lt colonel pearson. Charlies daughter jaqueline wanted me to see if it was Lt col Pearson in picture at Benouville June 6th 1944. Thanks. 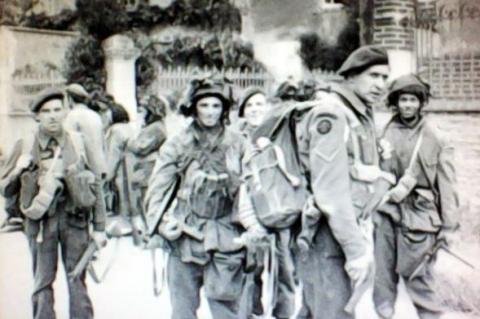