Charles Edward Naysmith served with airborne forces during the Second World War. He initially transferred to the Army Air Corps from the Royal Artillery, from a coastal defence unit when the threat of invasion to the British mainland had diminished.

Private Naysmith completed parachute course 17 at RAF Ringway in July 1942. he was posted to the recently formed C Company (Coy), the 2nd Parachute Battalion (2 Para Bn) under the command of Major J D Frost and took part in Operation Biting (Bruneval) and served with C Coy in North Africa on Operation Torch.

During the campaign, he is believed to have received a serious wound, and subsequently lost his right arm. Due to his injuries he was medically downgraded from parachute operations at some point in 1943-4. 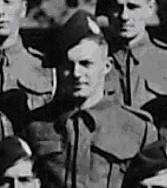