Charles Edward Eberhardie was born and raised in Begalum, India.

After returning to England in the late 1930's he attended Bedford School and was head boy in 1942.

After volunteering for airborne forces,  he was first posted to the 2nd Parachute Battalion on the 13th August 1944, but was sent on a Course whilst Arnhem took place, and was 'classed' as not present with the Unit.

He was away through to December 1944, re-joining the Battalion early in 1945. He is on the Officers photo taken at Oakham Camp in 1945. In 1945 the 2nd Battalion was tasked with providing re-enforcements to the 5th Parachute Brigade, who were about to deploy to the Far East, and he was one of those selected, and then went to the 12th Battalion.

Whilst he was with the 12th Bn, he was to act as liaison officer between the 12th Bn and the Kido Battalion in Java, Indonesia. Here he formed an unlikely, yet strong bond with Major Kido and they worked very successfully together. Major Eberhardie helped the Japanese Kido Bn with their patrolling techniques, leading deep penetration patrols to destroy enemy bases.

His mantra was "Fight the battle you're in, not the last one; shoot the enemy nearest to you and - dont't try to intellectualise a slit trench, just dig it."

Major Eberhardie also saw action in Palestine, Malaysia and Korea. He was awarded the Military Cross in Korea after executing a daring plan which involved allowing a platoon of his men to be surrounded giving his actual force the element of surprise against the Chinese. He successfully rescued his men and won the day.

Following this Maj Eberhardie commanded 16th Parachute Brigade from 1968-70 and was promoted to Major-General. He became Assistant Chief of Staff (Intelligence) at Supreme Headquarters Allied Powers Europe. He resigned from this job and lived the remainder of his life in Belgium and then France.

Major-General Eberhardie passed away on the 3rd October 2015, aged 90.

By Sam Stead with information supplied by Bob Hilton 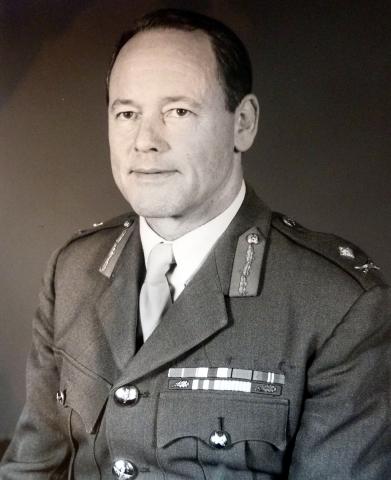