Charles Cecil Bolton was born in April 1923. He enlisted into The Queen's Royal Regiment on the 5th November 1941, before volunteering for the 1st Airborne Reconnaissance Squadron in 1942. He saw service with them in North Africa and Italy in 1943.

During training in the UK, Bolton proved every inch a typical airborne soldier when he was in a work party under Lt Dougie Galbraith comprising soldiers from both A and D Troops near Cirencester constructing a new camp. Bolton’s 21st birthday was coming up and he requested leave to travel home as his mother was going to hold a party for him. The leave request was refused as they were on duty and MPs were out in force rounding up deserters.

Bolton, therefore, asked his mates to cover for him, then set off home that afternoon to attend the party anyway. The next day when Lt Galbraith asked about Bolton’s whereabouts he was sent on “a merry dance” around the camp by Bolton’s mates.

The next morning Bolton returned early and on parade received a “hard stare” from Lt Galbraith who was keen to ensure his presence. Later, at lunch, Lt Galbraith approached Bolton and apologised for not being able to give him leave; Bolton replied "That's alright sir, I quite understand. Would you like a slice of my mum's birthday cake?".

At Arnhem on Sunday 17th September 1944, Bolton parachuted onto DZ-X near Heelsum. A member of No 12 Section, D Troop, he was the Number 1 on a Bren gun with Trooper Bert Welham acting as his Number 2. Together in a "D" Troop Headquarters jeep with Corporal George Dixon and Trooper Ron Brooker, they accompanied Major Gough in his search for Major-General Urquhart, and ended up at Arnhem Bridge. Gough mentioned Bolton in a 1967 interview:

Bolton garnered a fearsome reputation whilst defending his position at Arnhem Bridge, flicking the V sign at German troops before ducking into cover and taunting them. The Commanding Officer Maj Freddie Gough in particular remembered: "Bolton was crawling all over the place, sniping," says Gough, 'and every time he'd hit a German, he'd grin widely and say there goes another one of those bastards'.

Bolton was recommended for the Distinguished Conduct Medal for his actions at Arnhem, but was instead awarded the Dutch Bronze Cross in an agreement with the United States and the Dutch to commemorate soldiers with foreign awards. His citation reads:

On the night of September 17th 1944, Trooper Bolton was serving as Bren Gunner in a composite company guarding the road bridge at Arnhem. He was posted in a very exposed position in order effectively to cover the causeway and approaches to the bridge. He was continuously at his post day and night until September 20th when this force was recalled to Brigade Headquarters.

It was largely due to the extreme accuracy of fire and coolness of this soldier that continuous attacks by the enemy were repulsed. He was always finding targets and used his weapon with devastating results. Throughout the action this soldiers cheerfulness, steadfastness and utter disregard of his own personal safety had the greatest effect upon the morale of all ranks.

Bolton was taken prisoner at the end of the fighting around Arnhem Bridge. After returning from a prisoner of war camp, he rejoined the Squadron on their return to the UK from Norway in late 1945. On hearing that the Squadron and 1st Airborne Division were to be disbanded, he volunteered to join the 21st Independent Parachute Company which became a part of the 6th Airborne Division, and was officially transferred on the 26th November 1945. He served with them in Palestine.

Charles Cecil Bolton died in an accident on 20 December 1971. A note regarding what happened to him appeared in the 1st Airborne Recce Squadron Newsletter, No.36, in November 1992, by Jack Watson, Honorary Secretary / Editor.

I have heard another story recently concerning his demise. He always came home from work by train, and just before the train pulled into his station it had to pass close to some allotments - whether one was his I don't know. Apparently he was in the habit of opening the carriage door and jumping off the train when reaching these allotments. On the last occasion, his parachute (metaphorically speaking) failed to open and he was killed. Don't ask me for further details because that's all I was told.

Many thanks to Bob Hilton for the information in this profile. 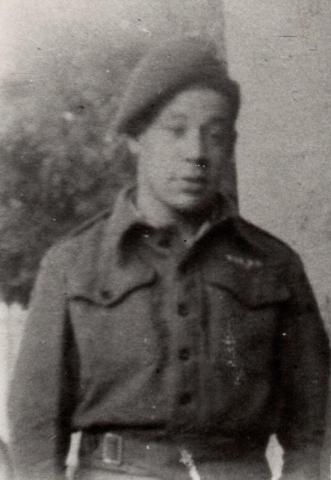