Charles Buckmaster was a parachute trained Conscientious Objector who parachuted into Normandy with the 224th Parachute Field Ambulance as part of Operation Overlord, on 6 June 1944.

An account of the Unit was written in late 1944/early 1945, titled ‘RED DEVILS. A Parachute Field Ambulance in Normandy’.

This is what Charles wrote;

“Personal Introduction to the Book of a Parachute Field Ambulance in Normandy, by the Reverend Charles Buckmaster, who went on the operation on ‘D’ Day, 6th June 1944 and became the Acting Quartermaster for the Unit in Northern France.

On September 1st, 1939, Hitler invaded Poland. Two days later France and Britain declared war on Germany. I was aged 19 – working in Goudhurst, Kent with the hop pickers. These were large families and neighbours who every year went from their homes in East London and spent the month of September camping in the Kentish hop farms and harvesting the crops. As a committed Christian I was being trained with the ‘Church Army’ (an Anglican Society founded by Wilson Carlyle) to be a Christian Social Worker and Evangelist. However, when the harvest had been collected the Church Army decided to cease training and I returned to my home where I lived with my parents at Kingston-on-Thames in Surrey.

Awaiting my call-up papers I worked in Kingston Post Office, and when they arrived I applied to be a Conscientious Objector on Christian grounds. After a hearing before a Tribunal, permission was given. Thus on the 24th October 1940 I was required to join the Non-Combatant Corps (which was a part of the Army Pioneer Corps) at an evacuated school in Dingle Vale, Liverpool.

My first months in the Army were spent on basic training and doing essential jobs, that some-one had to do. Loading lorries with food, coal, blankets or other supplies, as the need arose, and ‘hedging’ and ‘ditching’ in farms previously abandoned, but now taken over by the War Agricultural Authorities. They all involved long hours, hard work and were tediously boring.

By September 1940 the whole of Europe had capitulated and Hitler turned his attention to Britain. The Battle of Britain had begun. Huge air-raids on London and other cities put great pressure on the Royal Engineer Bomb Disposal Units. NCC members were invited to volunteer their services. Given two weeks training (most of which was spent learning how to blow things up) at Newark in Nottinghamshire, we were posted to Eltham in SE London, responsible for unexploded bombs from Tower Bridge to Woolwich. We watched German bombers fly in Squadrons up the River Thames every night and then dug up bombs which failed to explode the next day. When these were defused we took them to Erith Marshes in Kent and safely destroyed them.

18 months later (after Hitler’s decision to renounce his Non-Aggression Pact and attack Russia) Churchill had begun his plans to return to Europe and start a Second Front.

In June 1940 Churchill planned “a Corps of at least 5,000 Parachute Troops”, to be trained and based on Ringway – then the civil Airport of Manchester.

A Second Front would need a large expansion to those Airborne Forces which had already achieved success in North Africa and who had training and operational programmes in being.

All NCC members were withdrawn from Bomb Disposal Units in London and other cities and gathered into a disused Wood factory in the bleak Ilkley Moor area of Yorkshire. In due course we were told that we would be used to staff German/Italian POW Camps. However, we could volunteer to serve in the RAMC provided that we would be prepared to undertake parachute duties in No 224 Parachute Field Ambulance in the 3rd Parachute Brigade (led by Brigadier Hill) of the 6th Airborne Division placed (on the 1st May 1943) under the command of Major-General Gale.

We who volunteered exchanged our forage caps for the much more impressive Red Berets and an RAMC Cap-Badge and were ‘entrained’ overnight to Hardwick Hall in Nottinghamshire [Cheshire]. Here we passed a two week toughening-up course. Then on to RAF Ringway for practice jumps from a captive balloon, to live jumps over Tatton Park.”

“These hurdles behind us, with our newly-won wings sewn onto our tunics, we arrived at Tidworth Barracks near Salisbury. Here we met the Doctors and Surgeons, (many recently trained), who would lead us and share our medical training. We also learned the special skills required to set up a Medical Centre in any school or barn ‘somewhere in Europe’ which could be wholly supplied by air.

For months we trained and planned for the Second Front, and our arrival in Europe. What happened when D-Day arrived on the 6th June 1944 is written in this book”.

As a conscientious objector he followed his beliefs and after he demobbed went to college and became ordained to became a Reverend. Reverend Buckmaster taught at a Church of England teacher training college before working for The Missionary Society. He later became a local vicar before retiring in the 1980s. 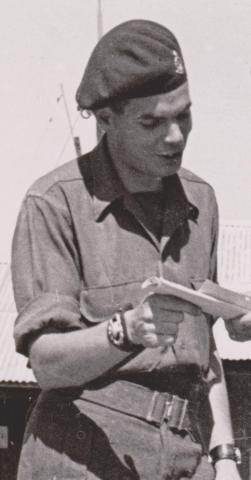