He passed out as a Sergeant/Instructor APTS and was posted to the 2nd Signal Training Centre at Prestatyn in Wales.

In 1941 he was promoted to Warrant Officer Class II (Company Sergeant Major Instructor) and posted to the Signals Holding battalion at Llandudno to train other Physical Training Instructors.

Later in the year he was posted to the Royal Corps of Signals Holding Battalion at Colwyn Bay, and then he was released from Army Service for three weeks to teach and train selected National Fire Service Personnel as Fitness Instructors.

In November 1942 he was recommended by Western Command for a commission, but he turned it down and requested to be Returned To Unit at Wrotham. He was then posted to the Army PT School at Aldershot, in December 1942, to await a new posting.

In January 1943 he was posted to the Eastern Command PT School at Colchester, but only a month later he was posted to the King’s Royal Rifle Corps at Northampton. Here he ran Fitness Grading Courses for all Warrant Officers and Non Commissioned Officers, before the Battalion was disbanded.

In September 1943 he was posted to the 1st Battalion, The Sherwood Foresters, then stationed at Yarmouth and Bacton.

Then in July 1944 he was posted to Hardwick Hall, near Chesterfield, which at that time was the Depot & School Airborne Forces. Here he had to undertake the selection process for becoming a parachutist. Having passed the ‘tests’ he went to RAF Ringway on parachute course No 128, which ran from the 7 – 20 August 1944. His parachute Instructors comments: “Excellent in every way. Cheerful, calm and confident”.

Upon completion of the course, he along with seven other APTC Instructors was posted back to Hardwick Hall.

In late August or early September he was posted to the 1st Airborne Division Headquarters at Fulbeck Hall in Lincolnshire, as the Chief Physical Instructor.

The 1st Airborne Division took part in Operation MARKET-GARDEN, 17 – 25 September 1944, and Sergeant Major Peck’s job was to take charge of the Divisional Headquarters element for the 2nd Seaborne Echelon. On the 20 September they moved to Tilbury Docks in London and boarded the SS Empire General that evening. Although they sailed on the 22 September and arrived off the beaches of Normandy on the 23 they remained on board. Eventually word came back from the battle area that things had not gone according to plan and they set sail for Tilbury on the 29, arriving there on the 30 September. From there the convoy returned to Fulbeck Hall in Lincolnshire.

He remained with the 1st Airborne Divisional, where his job as Chief Physical Instructor was now even more important, as the unit re-organised, reformed and retrained. Of the twenty eight Physical Training Instructors who had taken part in the operation at Arnhem, only six had returned, and a couple of them were badly wounded. There were five who had either stayed behind or gone on the Seaborne Echelon, who were also available, but out of a total force of 34 Instructors, he now only had 11. Never the less, between October 1944 and April 1945 the Division was reformed and retrained, so that by the beginning of May 1945 they were ready for action once more.

For Operation ‘Doomsday’, the 1st Airborne Division flew into Norway in early May 1945, and proceeded to round up the German Forces prior to screening and processing them, and then sending them home. CSMI Peck’s job became the running of a Recreation Centre at a place called Brevik – this would become christened the ‘Pegasus Club’. 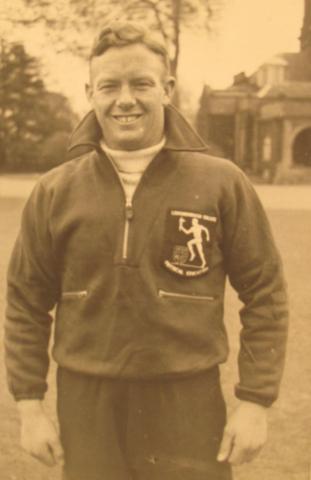 Sheila Roscoe said:
Cecil Peck was my father and it is good to read about his record of service on this site.
A few years ago, I donated his army sleeping bag to the Imperial war Museum at Duxford, where it was displayed in the First Airborne Division of the Parachute Regiment's Display hall. Correction: the hotel in Norway where he set up a recuperation stay for soldiers was at Fevik not Brevik, in Southern Norway.
Add your comment