Brian Whymark enlisted in July 1956, for national service and volunteered for airborne forces.

He was a member of 86 Platoon, Recruit Company, and attended parachute training course 431.

From November 1956 to February 1957  he served with Holding & Drafting Coy, where he was employed in the Orderly Room administrating the release documentation of troops getting demobbed.

L/Cpl Whymark qualified as a 3* Clerk after attended the Infantry Clerks' Training Centre (ICTC) at Chichester Barracks, earning him an extra £1.1.0 a week .

He was then posted to the Parachute Course Administration Unit at No 1 Parachute Training School RAF Abingdon and served as CQMS Clerk until July 1959. 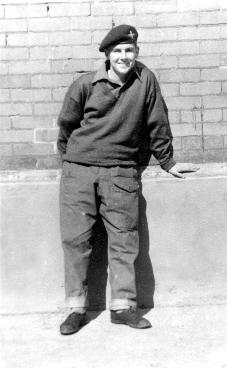