He was posted to 7th Regiment Royal Horse Artillery in Roberts Barracks, Osnabruck on 10 May 1977 and subsequently deployed to Northern Ireland (Op Banner).

Brian passed the All Arms Pre Parachute Selection at Depot Parachute Regiment & Airborne Forces Browning Barracks, Aldershot on 2nd March 1984 before returning to Lille Barracks, Aldershot in April 1984 when the Regiment returned to the parachute role as part of 5th Airborne Brigade. He completed the Basic Parachute Course at No 1 PTS RAF Brize Norton on 29 June 1984.

Whilst deployed to Canada with G Battery (Mercers Troop) RHA he completed parachute training at the Canadian Airborne Forces School to earn Canadian Parachute Wings on 31 July 1984. He was promoted to Sergeant in April 1987 and deployed to Australia on 30 April 1987 where he completed parachute training with the Australian Army earning the Australian Parachute Wings on 31 May 1987.

He continued to serve with the now re-titled 7th Parachute Regiment Royal Horse Artillery until 23 Aug 1989 when he was posted to Hong Kong. He served for two years at HMS Tamar Headquarters British Forces Hong Kong until promoted to Staff Sergeant and posted to Kirkee Barracks, Colchester as the Regimental Chief Clerk of 3rd Regiment Royal Horse Artillery on 13 August 1989.

Brian moved on compulsory transfer to the Adjutant Generals Corps (SPS) on 1 July 1993 and later deployed to Drummard Barracks, Armagh in Northern Ireland (Op Banner) with 3 RHA from October 1992 - April 1993.

He was promoted to Warrant Officer Class 2 and posted to 1st Battalion The Parachute Regiment in Montgomery Lines, Aldershot in June 1995 as the Regimental Administrative Office Warrant Officer. This was shortly before the Battalion moved to the new Normandy Barracks in Aldershot at the same time as being warned for operations in the Balkans. (The joint operation with 22 SAS was later cancelled.)

Brian deployed to Fort Bragg, USA in April 1996 (Ex Purple Star) with 1 Para along with the remainder of 5th Airborne Brigade and completed joint training with the United States Army's 82nd Airborne Division, earning his US Military Parachute Wings on 5th May 1996.

He deployed with 1 Para as Spearhead Battalion to Drumcree. Northern Ireland on 11 July 1996 and left 1 Para in July 1997 when posted to 3 RHA in Alanbrooke Barracks, Topcliffe as RAOWO. He served with 3 RHA until they moved to Hohne, Germany in July 1998 and remained in Topcliffe joining 40th Regiment Royal Artillery.

After completed his military service he was discharged from the army on 10 February 2000. 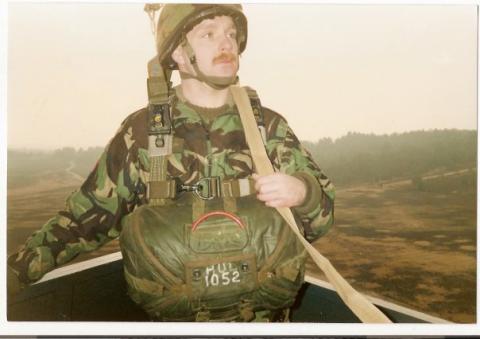