Bernard Taylor worked as an Electrical Switch Maker prior to enlistment into the British Army on 26 June 1942 in Holloway. After a short spell in hospital, he was posted to 58th Training Wing in December 1942 and then as a Trooper to the 9th Royal Tank Regiment in June 1943.

On 10 November 1943, he was posted to the Airborne Forces Depot and undertook his Parachute Training in December 1943 on course 94/95 at RAF Ringway. On completion of his training he was posted to 156 Parachute Battalion and on 18 September 1944 he jumped into action at Arnhem. Having returned across the river, he was sent back to the UK and promoted to Lance Corporal.

In December 1944, Taylor was posted to the 1st Parachute Battalion and took part in the liberation of Norway in May 1945. He was posted again to the 7th Parachute Battalion, shortly before they set sail for India in July 1945. During the voyage to India, Taylor was promoted to Acting Sergeant. From India, his unit was sent to Singapore and he spent time in Batavia and Java, where he was promoted to War Substantive Sergeant in January 1946.

He left Singapore in the summer of 1946 on board the SOS Alesea with his battalion and disembarked in the Middle East. In March 1947, he was posted to X8A List: 156 Transit Camp, embarking four days later for the UK.Taylor was discharged from the Army on 8 June 1947.

On 31 October 1952, Sgt Taylor re-enlisted into the TA, and served for four years with D Company, 11th Parachute Battalion (TA). 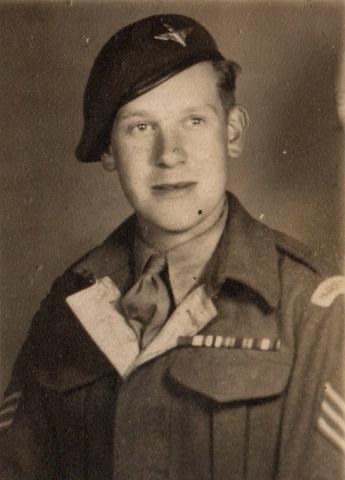