Bernard Snowden, son of Harry and Catherine Snowden of Wibsey, Bradford, Yorkshire, enlisted into The Royal Artillery during The Second World War.

He then transferred to The 53rd (Worcester Yeomanry) Anti-Tank Regiment which was redesignated as an Airborne Airlanding Light Regiment in 1943.

Gunner Snowden volunteered for airborne forces and attended Course 99 at RAF Ringway, which ran from 19 January to 3 February 1944, for parachute training. The course instructors' notes record: ‘Gnr Snowden: Cheerful, given of his best, very capable.’

He was killed on 11 August 1944, aged 20 years old. He is now buried at Ranville War Cemetery, Normandy. 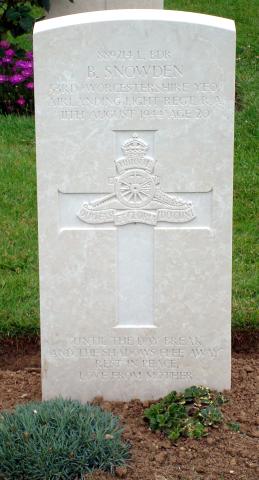