Bernard was born in Lichfield, Staffordshire. Second son of John Ashton and Daisy Perkins. He was taught by Sir Malcolm Sargent to play the organ. Bernard's family moved with this father's occupation as a grocer to Newark, Nottinghamshire.

Unlike his elder brother, who was in a reserved occupation as a tool maker at the Bearing factory, Bernard was a printer and joined up on 19 July 1945.

The Record Service card is stamped Infantry & AAC Record Office Exeter. Aged 18. After successfully completing a Certificate of Proficiency No1 ITC Parachute Regiment, he became a member of C Coy, 8th Battalion, The Parachute Regiment. He then went on to serve in Palestine.

Testimonial on his release leave certificate says "A good man who is honest and trustworthy. He is not afraid of hard work and willing to accept responsibility, most conscientious and keen to get on with life" 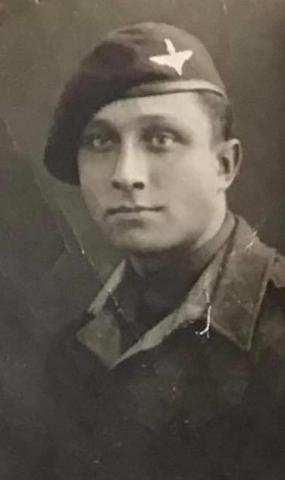