CSM Bernard Patrick MacGuinness transferred from The Cheshire Regiment into airborne forces during World War II, joining the HQ Platoon, 22nd (Independent) Parachute Coy. He was a keen sportsman, taking part in both boxing and tennis.

On 6 June 1944, CSM MacGuinness jumped into Normandy with members of his unit.  At 1100hrs on 9 June, he was sent out on a patrol under the command of Captain I Tait to operate in the woods South East of Landing Zone N, providing protection to a Royal Electrical and Mechanical Engineers (REME) Recovery Section.  It was for this action that CSM MacGuinness was awarded a Military Medal.  His citation reads:

"On 9th June 1944 at approx. 1200 hours a patrol led by the late Capt. I.A. Tait entered Breville, and was at once heavily engaged by enemy snipers and SA [small arms] fire. In this engagement Captain Tait was killed and CSM B.P. MacGuinness had two fingers shot off his left hand. Notwithstanding this CSM MacGuinness took charge of the patrol and ordered a withdrawal, leaving the Bren to give covering fire which he himself controlled, while the remainder of the section retired. After about 40 rounds the Bren became unserviceable. Using then only a Sten gun CSM MacGuinness got the section out of the village, and it was by his example and cool courage that the withdrawal was carried out without further loss." 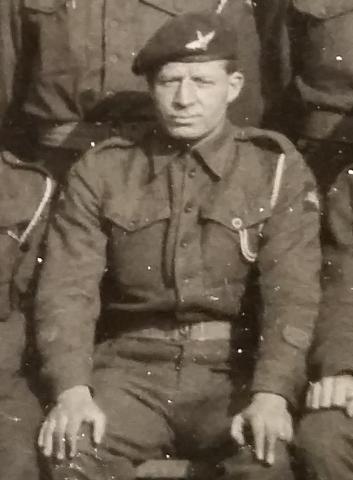