Bernard Law Montgomery - Monty - was born on 17 November 1887 in Kennington, Surrey, the fourth child, of nine, to The Reverend Henry Montgomery, an Ulster-Scots Church of Ireland minister, and his wife, Maud.

In a long and distinguished career Monty served in the British Army from 1908 onwards and rose to the rank of Field Marshal.

Monty graduated from Sandhurst in 1908 and during the First World War served with the Royal Warwickshire Regiment and was wounded during the Battle of Ypres in 1915. By the end of that conflict Monty was Chief of staff for the 47th (2nd London) Division.

In the inter war years Monty held a number of staff positions and married a widow, Elizabeth Carver, in 1927. Their son was born in 1928, and joined the 2 sons from Elizabeth's first marriage. Tragically Elizabeth died in 1937 due to an infected insect bite.

At the start of the Second World War Monty commanded 3rd (Iron) Division and successfully evacuated the unit virtually intact from Dunkirk in 1940.  Monty was outspoken about the leadership and tactics shown by the BEF and Allies and essentially his career stalled for a short while, even though he was awarded Companion of the Order of Bath at this time and eventually promoted to Lt General.

In 1942 he was appointed Commander in Chief Middle East and Commander 8th Army and earned his reputation as a meticulous planner with the ability to foresee his foes actions by carefully studying their character and tactics, with the successful Battle of El Alamein and subsequent routing of Axis Forces in the Middle East.

Monty proved popular with troops handing out cigarettes on visits and at this time started to sport a black Tankers beret, which became very much part of his image.

During operations initially in Tunisia and later in Sicily and Italy tensions rose with American Generals, particularly Patton and Bradley. However, this tension perhaps could be explained due to the competitiveness between such high status and determined military figures during a period of total war.

As an illustration Monty asked US General Beddell-Smith about acquiring a B17 Bomber for his own personal transport. Bedell-Smith jokingly replied that if Monty took the Tunisian location of Sfax then one would be provided. On taking the town Monty immediately demanded payment and a B17 was promptly supplied, although it did earn Monty a berating from the Chief of The Imperial General Staff Sir Alan Brooke as bombers were in short supply at that time.

In Italy Monty was presented a maroon beret by Maj Gen Hopkinson shortly before he himself was killed.  Monty wore that same beret for many years after and it is now in the collection of the Airborne Assault Museum.

Monty was then ordered back to the UK in January 1944 to command the newly formed 21st Army Group and prepare for the invasion of Normandy. During this time Monty visited airborne forces wearing his maroon beret, windak smock and camouflaged parachute silk scarf.

This enduring relationship with airborne forces lasted throughout Monty's life and in 1944 he was appointed Colonel Commandant of the Parachute Regiment.

After the successful Normandy campaign in the allotted 90 days during which the Commonwealth forces engaged the bulk of German armoured divisions allowing the Americans to stage a break out, planning was then advanced for what would become Operation Market Garden.

Again, this operation and Monty's role has been mired in nationalistic military arguments ever since, due to claims and counter claims by the leading generals of the time. This was accelerated by inappropriate boasts by Monty during the Ardennes Campaign which almost resulted in his dismissal. Despite German general Van Manteuffel stating that Monty's action had stabilised the Allied efforts at the time and allowed for successful counter attacks.

After the war, Monty was made commander of the British occupation forces and served on the Allied Control Council. In 1946, he was elevated to Viscount Montgomery of Alamein for his accomplishments.

Serving as Chief of the Imperial General Staff from 1946 to 1948 and in 1951, he served as deputy commander of NATO's European forces and remained in that position until his retirement in 1958.

Monty continued his relationship with The Parachute Regiment and airborne forces postwar including officially opening the Airborne Forces Museum at Aldershot on 23rd March 1969.

Montgomery died on March 24, 1976, and was buried at Binsted, Hampshire. 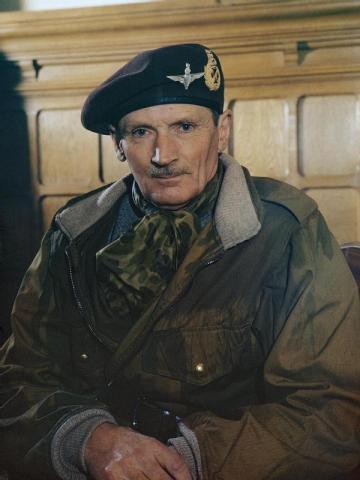