Bernard Hollobone enlisted into the Royal Sussex Regiment and was serving with them in the Middle East when he volunteered for the airborne forces.

The 10th Parachute Battalion (10th Para Bn) was formed from the 2nd Battalion The Royal Sussex Regiment at Kabrit in the Suez Canal zone in January 1943, After completing parachute training in Kabrit, Sergeant Hollobone served in Italy with 10 Platoon, B Company 10th Para Bn before returning to the UK.

Sgt Hollobone jumped into Arnhem on Operation Market Garden on 17 September as a Section Commander of 10th Battalion Advance Party. During the withdrawal of Arnhem Sgt Hollobone managed to return across the river Rhine.

The under-strength10th Battalion was disbanded in October 1944, with any remaining soldiers of 10th Para Bn sent to join the 2nd Parachute Battalion.

Sgt Hollobone was demobbed in April 1946. 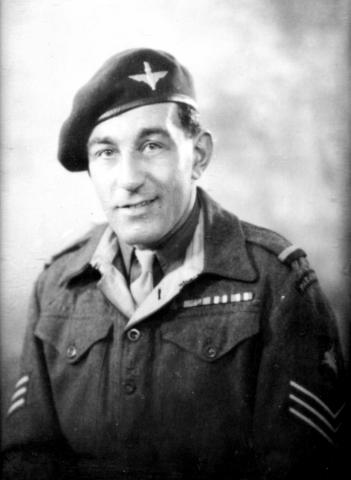