He enlisted into the Army in 1939 and was granted an emergency commission in the King's Regiment (Liverpool) in June 1940. While serving on home defence duties Bernard volunteered for the Glider Pilot Regiment on its formation and later travelled to North Africa with the Regiment's 1st Battalion, where he learnt to fly the American WACO Glider.

Initially, the pilots built their own gliders, named the Hadrian by the British Air Ministry.The glider production line existed in the most austere conditions, and Bernard lived with his fellow pilots inside the empty packing cases that had contained the glider major assemblies shipped by sea from America.

Some 144 WACOs, along with a small number of British Horsa gliders, were used for the first ever large-scale Allied glider operation launched on 9 July 1943 into enemy occupied Sicily and codenamed Operation Ladbroke. Bernard flew a WACO glider alongside his first pilot, Captain Tom McMillen. The two men were responsible for their aircraft and the fourteen fully laden air landing infantrymen of the 2nd Battalion The South Staffordshire Regiment on board.

Their WACO took off from Sousse at night directly into thirty-miles per hour of headwind and a dust storm, heading initially for Malta and then turning onto a course for Sicily. The two men wrestled to keep their glider on station with its tug, as the two aircraft bucked and weaved at 125 mph, just 250 feet above the Mediterranean Sea. The delivery of the glider force did not go well; only 78 of the gliders towed from North Africa were destined to reach Sicily and only 12 landed their troops on their designated Landing Zones.

Amidst the confusion and worsening visibility over Sicily both glider pilots lost sight of the station-keeping lights on their USAAF C47 Skytrain tug aircraft. In spite of losing the main formation, the USAAF pilot managed to find the correct release point and the glider cast off from its tow. It was just after this point that Bernard spotted a fire on the ground below and pointed it out to Captain McMillen at the controls. The two men brought the heavily laden glider into land at an approach speed of eighty miles per hour and the landing run came to an abrupt halt when the nose of the glider crashed into the low stone wall of a tomato orchard. Captain McMillen injured his leg during the crash; Bernard came away from the landing without injury.

Once the glider pilots and their passengers had extracted themselves from their battered glider they set off for the Ponte Grande Bridge outside Syracuse; Bernard took the lead. On arrival, they found that the vital bridge was already in the hands of the 2nd Battalion of the South Staffords and other elements of the 1st Air Landing Brigade. The new arrivals were given positions and arcs of fire covering a section of the airborne defensive perimeter around the twin-span highway bridge. Italian counter-attacks on the bridge persisted through the afternoon and into the night. During the second day of the battle British ammunition stocks ran low and casualties mounted.

At 1530 hours, the order to surrender was reluctantly circulated among the Ponte Grande defenders. Bernard and the majority holding the bridge were taken prisoner by jubilant advancing Italians. Captivity lasted just forty-five minutes, ending with the arrival of advancing British Eighth Army tanks and infantry.

Bernard's bravery during the Ponte Grande battle was subsequently recognised by the award of the Military Cross. His citation states: "This officer showed great leadership and courage in his first gliderborne operation. He not only landed his glider successfully on the island but he led his platoon to the objective against great odds. He took over the defence of a sector of the Syracuse Bridge and throughout several counter attacks showed coolness and courage and was an inspiration to all. It was due to his leadership that his sector held for 15 hours and credit showed to Lieutenant Halsall that the operation as a whole was a success."

He was then posted to the Glider Pilot Regiment’s newly formed C Squadron at Tarrant Rushton airfield in Dorset. Here he began conversion training on the newly developed Hamilcar heavy lift glider. The Hamilcar was designed and built to carry the Tetrarch Mk IV light tank for use by both British airborne divisions. Bernard was trained and earmarked to fly as first pilot on any reinforcement operation mounted by 1st Airborne Division; in the event neither he, nor 1st Airborne Division, were deployed for Normandy.

Bernard was later selected to fly as first pilot on a Hamilcar for Operation Market. Unfortunately the Halifax tug aircraft developed engine problems and the heavyweight glider was released over Belgium, however Bernard managed to land his Hamilcar safely in a farmer’s field. He was promoted to Temporary Captain shortly after his return to the UK.

Bernard's final operational flight was at the controls of a Hamilcar carrying a Seventeen-pounder anti-tank gun and its Dodge Limber over the Rhine. He successfully landed his glider five miles inside Germany on the correct landing zone.

After the war Bernard moved to Leicestershire, where he became an agricultural merchant and pioneered the delivery of bulk fertilizer direct into the field.

Compiled with the assistance of Maj Mike Peters AAC

It was June 1943 and North Africa was in Allied hands.

Captain Bernard Halsall, who died on March 4 aged 89, was an Army pilot and took part in every major glider airborne assault of the Second World War . 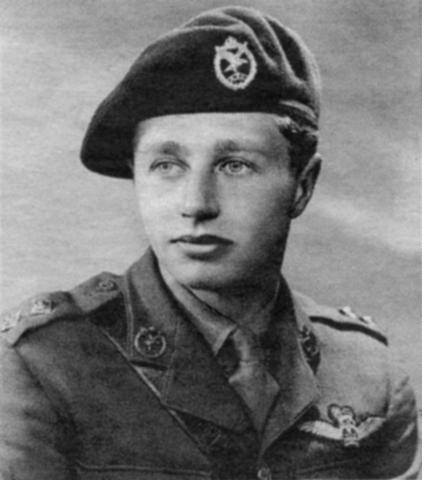