Barry Crowe was born in 1955 and lived in the village of Doddington, Cambridgeshire. He attended Cromwell Community School and left aged fifteen to work for British Railways as a trainee train driver.

Having been a corporal in the Air Cadets and at seventeen starting sport parachuting, he decided to join the Parachute Regiment TA. His nearest unit was in the London area, a journey of 2 hours by train.  Despite the distance Barry enlisted into 10th Battalion (V) The Parachute Regiment on 19 October 1974 on a two year engagement. He joined Cadre 67 and  successfully completed basic training and P company  on 25 May 1975. Barry was posted to HQ Company Signals Platoon. However wanting to stay with the lads he did basic with Barry requested a transfer into 1 Company at White City.

Later that year he attended military parachute training at RAF Abingdon, Oxfordshire on course TA 10/75. After completion of eight parachute jumps he was awarded his 'Wings' on 26 June 1975. The official course report states the following - 'Course TA 10/75 suffered a higher rate of injuries than normal due to high winds and the rock hard condition of the DZ.'

In June 1976 Barry qualified as a basic German military Parachutist and was presented with Bronze German wings. In September the same year he took part in Ex “Teamwork 76” in Norway. This was mainly an amphibious assault exercise, the biggest since D-Day. Barry was  attached to B company, 2 Para  acting as enemy to NATO Marines.

On 19 September 1977 he took part in a major airborne exercise in Denmark on attachment with 2 Para. This was a mass drop of over 700 men and involving around sixty C-130 Hercules aircraft.

On 6 September 1980 he attended and passed the Platoon Commanders (Infantry Tactics) course at the School of Infantry, Brecon. But later declined promotion of Sergeant due to the distance to the  unit and therefore not being able to attend evening training periods, Sergeant mess meetings and functions.

He left the battalion for personal reasons on 16 October 1984.

Throughout his ten years in 10 Para he more than achieved his annual training commitment. Barry conducted sixty two military parachute jumps including one water jump.

Profile picture is of Barry Crowe in Stanta, Norfolk. 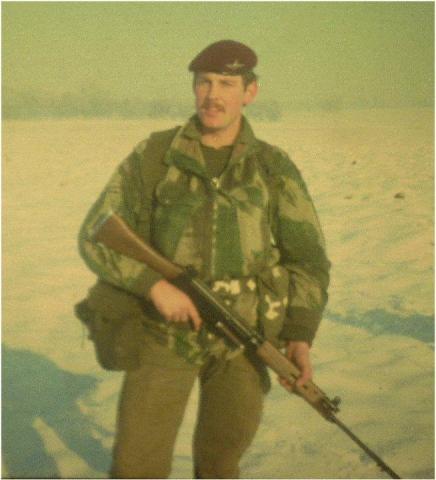