Burton Henry Peter Jackson was born in 1919, the only child of Captain Reginald Jackson, RN. Educated at Cheltenham, he was commissioned from RMC Sandhurst into the East Surrey Regiment on the eve of war in 1939 and went to France with the British Expeditionary Force.

Peter Jackson was one of the first pre-war regular officers to transfer to the Glider Pilot Regiment at its inception on February 24, 1942. This was not a calculated career move but a reflection of his determination to return to active service. Having been evacuated through Dunkirk with his Regiment, he found military life in England rather mundane after the German invasion scare had receded. He went to North Africa as a member of the 1st Battalion, Glider Pilot Regiment with the 1st Airborne Division. But instead of taking part in the invasion of Sicily, he found that his piloting skill and leadership potential led to his return to England to establish and command the newly designated ‘E’ Squadron GPR for the Normandy invasion.

Under his command ‘E’ squadrons Horsa gliders carried the main body of the 1st Battalion Royal Ulster Rifles of 6th Airlanding Brigade to the landing zone immediately north-east of Ranville on the evening of D-Day. The Brigade’s task was to relieve the 5th Parachute Brigade east of the River Orne on the extreme left flank of the Allied landings. The scale of the operation can be judged by the allocation of 220 Horsa troop-carrying gliders and 30 massive freight carrying Hamilcars to the brigade.  This total included the 47 Horsas of Jackson’s squadron. He emerged unscathed after the operation — which overall was considered a striking success since only 17 of the 347 gliders that flew on that first day failed to land in France. A dramatic improvement on the debacle of Operation Ladbroke less than a year earlier.

Peter Jackson subsequently returned to England to prepare for the next important airborne operation. This was Market Garden, the planned capture of the road and rail bridges over the Lower Rhine at Arnhem. Jackson again led E Squadron (Chalk Number 219) on a brilliant Sunday morning on 17 September 1944. As the first lift of the great air armada flew towards the Suffolk coast from their bases in the South of England, he later recalled looking down to see people in the streets on their way to church stopping to stare and wave their encouragement.

Once more he was fortunate to make a safe landing in a stubble field (LZ S) with no interference from the enemy — those in his immediate vicinity made themselves scarce as the troops poured out of the Horsas. While contemplating his landing Peter was interrupted:

‘Immediately after landing I was surprised by one of the passengers who came forward and said: ‘Please Sir, could I take off my lifebelt now? My answer was apparently to the point and unloading was proceeded with…There was one gentleman who did not appear to be in the least disturbed by the whole affair and that was an elderly Dutchman. He was sitting on a wall placidly smoking an ancient pipe which was removed from his mouth long enough to say ‘Good morning’ and then resumed his smoking, just as though he had spent most of his life watching glider landings.’ 1

All the glider pilots who survived the landings fought as infantry in the bitter battle to defend Oosterbeek and the Landing Zones. With them, he was confined in the Oosterbeek perimeter, fighting primarily around Wolfheze:

‘The next morning news was received of the approach of the Germans and the Squadron disposed themselves in a wood and dug in and waited for their attack. In this wood was a large mansion, which was being used as a home for blind people. Unfortunately the previous day it had suffered from bombing but even this calamity did not seem to affect the welcome the inmates gave to our forces. One old man who addressed me in a broad Scots surprised me. He had apparently been living in Holland for twenty years prior to the war. His main concern was to know if the German reports were that Aberdeen had been razed to the ground by flying bombs. His joy at the contradiction of this report was overwhelming. He the turned to more personal topics and asked me how long I was in the country. I told him ‘twenty four hours’ to which the old man with an expression of disgust replied, ‘Been here twenty four hours and not had a Dutch girl yet? Bah’ All this was of course in broad Scots dialect.’ 2

Peter escaped across the Rhine during Operation Berlin, when the order came for the remnants of the 1st Airborne Division to withdraw across the Rhine he swam the 400 yards to reach the south bank. He remembered clearly being pulled out of the river by men of the Dorset Regt.

Peter’s ‘E’ squadron lost 40 pilots killed in action at Arnhem, and many others were wounded or taken prisoner, leaving Jackson the task of re-forming and retraining the unit for operational readiness in the shortest possible time. A large contingent of freshly qualified RAF pilots was drafted in to help replace the losses. Thanks to his determined direction, the squadron was operational before the next requirement, Operation Varsity, the airborne crossing of the Rhine on March 24, 1945.

Although it was in many respects a set-piece operation, Jackson recalled the Rhine crossing as the most difficult of the three in which he had taken part. Haze and a pall of smoke obscured the landing zone, around which the battle was already in progress. But he got his glider down safely in the most north-easterly landing zone at Hamminkeln to discharge his payload of men of the 2nd Battalion Oxfordshire and Buckinghamshire Light Infantry. Having been mentioned in dispatches twice, once for D-Day and again for the Arnhem operation, he was awarded the Distinguished Flying Cross after the Rhine Crossing and also received the American Silver Star.

With the future of the Glider Pilot Regiment uncertain after the war, he transferred to the Royal Army Ordnance Corps, with which he served in Kenya, the British Army of the Rhine and in England.

He followed hounds as a young man and maintained a keen interest in the countryside throughout his life. When the post of secretary of the Grafton Hunt fell vacant in 1969, he left the Army to take it up, holding it until 1982. He and his wife also bred hunters and won the Supreme in Hand Championship with their two-year-old, Sammy Dasher, at the Horse of the Year Show in 1974.

Compiled with assistance from Mike Peters 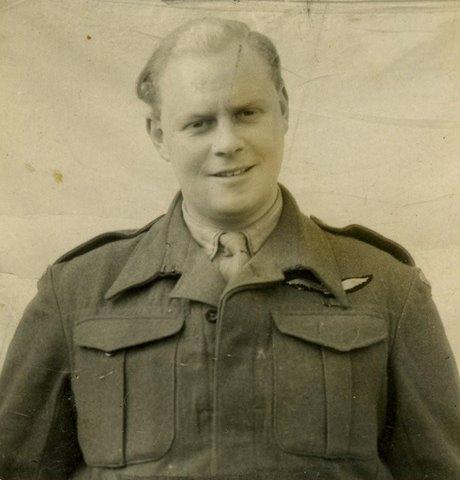